My life with the Walter boys by Ali Novak | Teen Ink

My life with the Walter boys by Ali Novak

I honestly hope that this story is fictional.

It started out innocently enough.

Jackie's family dies in a car accident, and she has to move from New York City to a farm in Montana to live with her mother's college friend. College friend has about seven kids, and only one is a girl (and a tom-boy at that). It's a big shocker for Jackie, who has worked all her life to be a perfect girl. But it's pretty hard to be perfect in a house full of chaos.

Now, I would have been satisfied if Miss Novak had stuck to the plot of getting over loss, tarzan-swinging out of haylofts, and the hilarous antics that happen in every family that are so often overlooked. But evidently the story needed more spice, or, to some of us, Kumis put in a blender with the Carolina reaper and Escamoles. Where we could have had a simple, pleasant story about family, belonging and not having to be perfect, we get a story that is crammed full of love triangles, un-gentleman like behavior on several levels (Aka, stealing girl's clothes while she's in the shower and seeing if she'll come out), and alchohol-ridden parties.

The main plot of the book becomes whether or not Jackie should be the girlfriend of the Walter boy who makes her comfortable and accepts her in the home, or 'hot' Cole, who doesn't want to be alone.

First off, 'I don't wanna be alone' is not a good excuse for a relationship. Ask Messy Mondays.

Second off, I don't believe that making a girl skip school, getting her drunk, wearing only your underwear in front of her, and throwing tantrums and plotting revenge when upset is a good way of starting a relationship.

Thirdly, you really think she wants a relationship with you when you've got a girlfriend for every hour of the day (and night...) and you treat them all like dirt?

And I think I'd feel really uncomfortable if two guys were sleeping on either side of me on the living room floor, one holding my hand, the other's arm around my waist!

(Can we not describe what the YOUNGEST brother did with the girl's underwear? Thank you!)

I really hope that the teenage generation has not sunk to this.

It was actually interesting when one of the Walter boys got a stroke, then gave his two aforementioned brothers a deserved yelling in the hospital.

Basically, if anyone here is looking for better examples of true gentlemanness and true love, read Jane Austen before you read this. 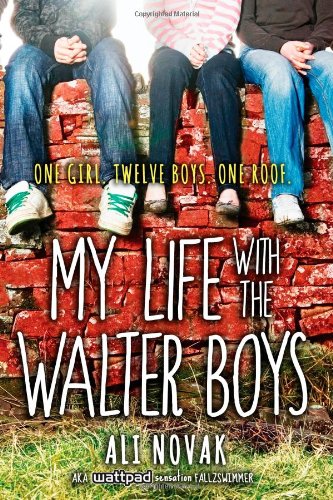