Video piracy, running away from home, illegal activity—at first glance, nothing about the book Pirate Cinema drew me in. But page by page, I became hooked to Cory Doctorow’s story about a fight for freedom of creativity. Based on the real-life Pirate Cinema movement, this story is the tale Trent McCauley, a teenager in a slightly futuristic Britain.
Addicted to illegally downloading and editing major motion pictures into his own works of art, Trent causes his family to be cut off from their Internet supply. In a society where virtually everything—school, work, money—revolves around the use of the Internet, Trent’s family begins to fall apart. To escape the ensuing guilt, Trent runs away to London, a city of fascinating adventure, leisurely tramps, strange fashion, and wonderful coffee.
As Trent establishes a rugged lifestyle and an unbreakable bond with his new friends, he is introduced to the political world of piracy laws. Here, Trent discovers that the big movie businesses are whipping the government to legislate to their favor against the general public’s approval. Stricter laws are passed, and Trent, with the help of his friends, begins to realize that there is more to copyright laws than simply protecting a company’s video. Pirate Cinema shows Trent’s point of view as he fights the law to defend people’s right to creativity.
This captivating book is simple enough to be read easily, but complex enough to cause readers to really think deeply about what is right and wrong in modern media and government. With an equal balance of wit, adventure, romance, and political affairs, Pirate Cinema is great for the sophisticated reader who is interested in modern social issues as well as teen mischief and intriguing new perspectives. 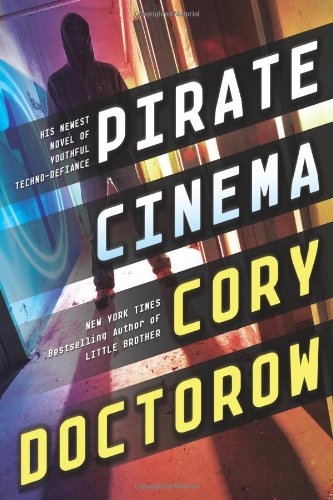