The Immortal Rules by Julie Kagawa

This book takes some old ideas and squishes them together in new ways to make a delightfully original story. It is a vampire/zombie apocalypse adventure with more than a few hints of samurai legends. I love it. It's dark and dramatic and powerfully written. Plus it has vampires fighting zombies. Beat that! Well, they're called 'rabids' in the book, but they're basically zombies.

Allie is one tough lady. Having spent her entire life hating vampires, she suddenly is one. Under the tutelage of Kanin, a mysterious, solitary vampire with many secrets, she starts to learn how to be a monster without becoming a monster. He teaches her how to use her new abilities to survive and defend herself and gifts her with a katana. (A vampire slaying zombies with a katana - like I said, beat that!) This interlude does not last long, however, and Allison is forced to set out into the world on her own. It is there that she discovers a wandering group of humans - and Zeke.

I really like Zeke (full name Ezekiel Crosse). He still has hope in a world that offers none. He's a born leader; protective, selfless and brave. He's also falling fast for Allie - or the human he thinks she is. Despite how much I like him as a love interest, I have this kind of half-hope that Kanin will turn out to be...but I doubt it. Maybe. We'll see. He's pretty entrenched in the mentor role for now.

All-in-all, I loved this book. Great characters, wonderful story, serious and fun at the same time...what's not to like? I would highly recommend The Immortal Rules.

I received an e-galley of this book through NetGalley in exchange for a fair and honest review. 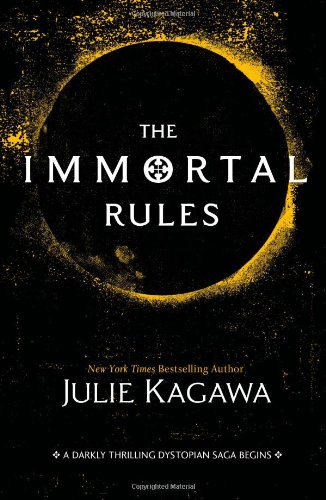