In Crissa-Jean Chappel’s third novel, More Than Good Enough, readers will find that Trent Osceola’s story isn’t that different from the average coming of age tale. However, some aspects of the novel will prove to be unique and will definitely spark interest in the book’s targeted audience.

After failing out of a school known for educating musical “prodigies”, Trent’s mother announces that he will no longer be living with her. He will be moving to the Miccosukee reservation to live with his father. A man who was just got released from a decade long prison sentence. Trent feels like he doesn’t even know the man who he’s supposed to call “dad”. He knows some things, like that his dad is one hundred percent Miccosukee and that he is the one responsible for Trent’s guitar talents. But other than that, the man is a stranger.

Adjusting to a new home life with his dad would probably be easier if they didn’t live on the rez. Stuck in the middle of the Everglades with an entire tribe of Miccosukee Indians, Trent, who is only half Miccosukee, begins to feel isolated from the society. He doesn’t know who he is or where he belongs. But it’s through the eyes of his childhood friend, Pippa, where Trent begins to realize that his attitude and antics are becoming more of a problem than he originally thought. Trent wants to be good for the rez, for school, and for Pippa. But is that really possible at this point? Can someone change who they are destined to be? Or have the choices Trent made in the past defined him for life?

Through Trent, Chappel has introduced readers to a new and different story of self-discovery. Although some aspects of More Than Good Enough are a bit overused, Chappel does present fresh and innovative ideas. Her research of Native American tribes proved to be worthwhile, as she wrote it both interestingly and elegantly. However some readers might not find this piece of the novel to be enough to win them over. The ending, although fulfilling, does prove to be rushed. Readers might wonder what they missed of Trent’s story. And although parts of the novel prove Trent to be a semi-relatable character, he doesn’t come across as the most likeable. Therefore readers who do not find the final few chapters as impeccable, will no doubt wonder if what’s missing could prove to change their disposition when it comes to their feelings toward Trent and most importantly, to the novel. 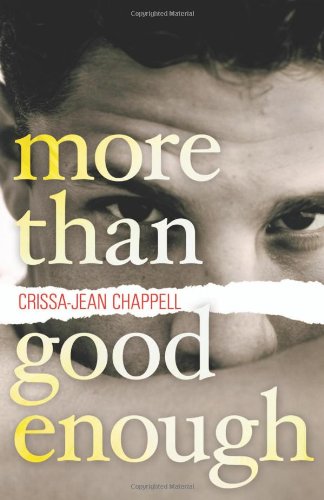 Favorite Quote:
"Fate is like a strange unpopular restaurant, filled with odd waiters who bring you things you never asked for and don't always like." - Lemony Sniket