Though she wrote Sense and Sensibility and Pride and Prejudice, Jane Austen's greatest love story may have been her own. Her love was her inspiration, challenging the sense and sensibility of the age.

The somewhat biographical movie “Becoming Jane” is about the relationship between writer Jane Austen (Golden Globe-nominee Anne Hathaway) and lawyer Thomas Lefroy (British Academy of Film and Television Awards winner James McAvoy). It captures the stubbornness and individuality of the young Jane, as well as the playful rebelliousness of Tom.

In the late 18th century, a woman's wealth was determined not only by family but by marriage. It was considered a woman's duty to marry well and for wealth, not affection. Mr. Wisely, nephew of Lady Gresham, a formidable and wealthy aristocrat, seems to be a smart choice for Jane. However, when Jane meets Tom, a disagreeable lawyer from London with a reputation for womanizing, she begins to dream of doing the impossible: marrying for love.

At first, Tom's arrogance frustrates Jane, and yet, this quality makes her fall in love with him. Their love soon ­becomes a burden for them. Marriage would mean risking everything, and not marrying would mean separation forever.

“Becoming Jane” is an exuberant film with a brilliant cast that captivates viewers' attention almost immediately. The shooting locations (Dublin and rural Ireland) are breathtaking, leaving audiences in awe. I have never been fond of historic biographical films, but this one captured me and left me thinking about it for weeks! The soundtrack, composed by Adrian Johnston, consists of memorable pieces that tie everything together.

Though Austen's literary accomplishments are significant, her life story is surely even greater. From her first encounter with Thomas Lefroy to the very last, she grows as a woman, a writer, and ultimately, a legend. “Becoming Jane” captures this growth, pulling the viewer into Jane's footsteps, giving insight into her life, as well as her affection for Tom – a romance so passionate, words cannot ­describe. 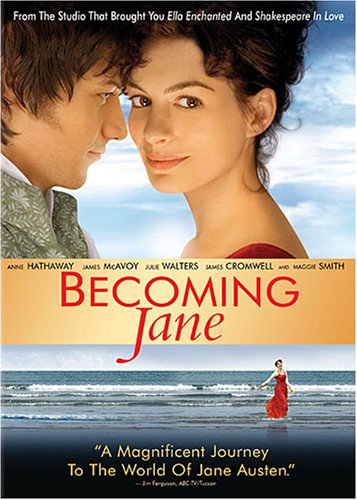 Favorite Quote:
Do not dwell in the past, do not dream of the future, concentrate the mind on the present moment.
-Buddha.

I only just finished watching the movie last night and fell in love with it.
It actually reminds me a bit of Emma.