Favorite Quote:
"What goes in must come out, so if you put nothing in, expect nothing in return"

When I watched Easy A, I noticed the movie’s great allusion to the classic novel, The Scarlet Letter by Nathaniel Hawthorne. In both works, the average girl is accused for committing adultery and goes from being another brick in the wall to being a celebrity for all the wrong reasons. They both accept their “sins”, and find creative ways to use their sin as a positive effect on the community. In Easy A, Olive Pendergast (played by Emma Stone) uses her accusation to give her the reputation as a prostitute (excuse the vulgar language), and uses this reputation to stage sex with the rejects of high school society so they could have a chance to join the rest of the community. Hester Prynne, from The Scarlet Letter, on the other hand secludes herself from society and utilizes her talent of knitting to create extravagant clothing for many members of the community. Ironically, in both cases, the many people who accept the services of these two women are sinning, but are not given the same punishments for their actions. In Easy A, adultery is still a major crime against morality as reflected with the early scene showing the school’s chastity club run by Marianne (played by Amanda Bynes). Still, many individuals request Olive if they could stage a fake sex scene so they could be included with the rest of the crowd. Although, adultery is moral crime, these young men go unpunished while Olive retains her horrible reputation. Likewise, in The Scarlet Letter, most of the community accepts Hester’s intricately designed clothing; meanwhile, wearing such an attire is considered blasphemous in the austere Puritan society. They therefore are sinning when wearing this clothing, but these people go unpunished as well. Of course, there were many people who were completely against Hester and Olive for their actions. In Easy A, Marianne shunned Olive for her actions and makes her remaining time as a senior at her high school a nightmare. In The Scarlet Letter, men like Governor Bellingham and John Wilson believed that a sensible punishment for Hester would be to strip of her last possession- her child, Pearl. Ultimately, Hester retains custody of her child thanks to the efforts of Dimmesdale, but men still viewed and treated Hester as a lowly sinner. I also found it interesting how in Easy A, Olive encountered the guidance counselor and discovered that she had an affair with a student enrolled in that high school. In The Scarlet Letter, Hester also encountered a sinner, who was a witch named Mistress Hibbins who planned on killing Hester if she had submitted to her plans. Although both the guidance counselor and Mistress Hibbins were punished for their crimes (the guidance counselor got divorced and lost her job while Mistress Hibbins was executed), the punishments for these characters seemed unimportant in context to the overall works. As one can plainly see, the similarities between these two works are vast and astonishing. 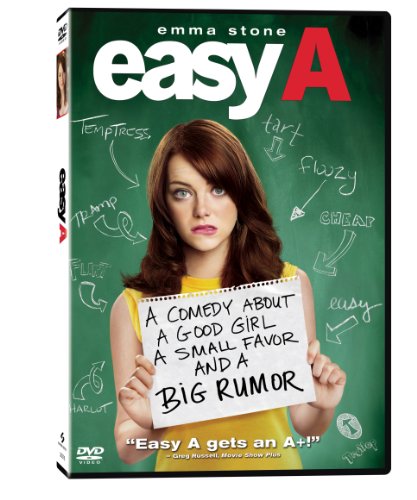 
Buy from Amazon Available on iTunes
The author's comments:
At the time I watched this film, we were reading The Scarlet Letter by Nathaniel Hawthorne during my 11H English class. I first noticed the allusion of thi novel when Olive got shunned from her high school community. The scarlet "A" on her bosom I found hysterical because it was just like Hester's in the novel (I was probably the only one laughing in the movie theater when I saw Olive saunter down the hallway.)I guess the actual mention of The Scarlet Letter gave away the fact that this entire movie was based on this novel. THe only difference was that this movie was in a high school setting, not a strict Puritan society in 17th century New England.
Post a comment
Submit your own