Favorite Quote:
"Angelheaded hipsters burning for the ancient heavenly connection to the starry dynamo in the machinery of night... Moloch whose eyes are a thousand blind windows!...Moloch who frightened me out of my natural ecstasy!" -Howl Allen Ginsberg

I had the privilege of going to see the new Muppet movie last week. Needless to say, I was thoroughly enthused. It was definitely fit for all ages. All the people in their thirties loved it because the Muppets were their childhood. All the children who saw the movie enjoyed it because it was up-beat, fast paced, and it was very easy to follow. Everyone in between loved it because the comedy was so silly you couldn’t help but laugh out loud.

One aspect that really made me rave about this film was there was a very clever storyline. Here is the plot: Gary (played by Jason Segel; who I am just completely in love with) and his brother Walter (played by a puppet obviously foreshadowing that he is to become a Muppet) grew up together and Walter was obsessed with the Muppets. They both grew up, but only Gary “grew up” in the physical sense. (Jason Segel is 6’4? whereas the puppet, Walter, was 3?.) Gary and his girlfriend named Mary (played by the lovely Amy Adams) decide to go to Los Angeles for their anniversary and at the last second, Gary invites Walter along so that he can go see The Muppet Studios. (this is where they break into their first musical number, “Life’s a Happy Song” which genuinely made me smile. They arrive in Los Angeles to find that The Muppet Studios is completely run down and a big wig CEO of an oil company, Tex Richman, is trying to buy the studios and destroy it. But, if the Muppets can raise $10 million dollars they can purchase the lot before Tex Richman. With the help of our friends Gary, Walter and Mary, the Muppets are reunited and of course the only thing to do is put on a show! So the whole gang gets back together and that is an adventure of its own. Thankfully, the fan favorites are back! Kermit The Frog, Miss Piggy, Fozzie Bear, Gonzo, Animal, and the rest of our “near human” buddies. It is a whirlwind of absurdities, goofiness, and best of all totally Muppet-like behavior.

Practically every celebrity in the world has a cameo in this movie. Some of the highlights of the movie included the kidnapping of Jack Black, with appearances by Neil Patrick Harris, Zach Galifianakis, Dave Grohl –Drummer of The Foo Fighters and Nirvana– Selena Gomez, Jim Parsons, who coincidentally played Walter in Human Form in the show stopper song, “Man or Muppet”, and Rico Rodiguez, “The Modern Family kid” as it were. I really adored the relationships between Mary/Gary and Kermit/Miss Piggy and the Camilla and The Chickens (Muppet stars) rendition of “Forget You” by Cee Lo Green as well. What really sold the movie for me was ultimately the musical numbers. I laughed, I cried – you get it. They were so catchy, crowd friendly, and witty that I ended up downloading the entire soundtrack and now know every lyric to “Life’s A Happy Song”, “Man or Muppet”, and “Me Party” (performed by Mary and Miss Piggy, while feeling neglected by their significant others).

The dialogue was clever, the acting was diverse, and the concept overall was deliciously gratifying. Amy Adams was a pleasure to watch on screen with her bubbly personality and her contemporary mannerisms. We already know Adams is capable of fluffy musical movies from when she starred as Giselle in the blockbuster hit, “Enchanted”, as a caring and naive singing princess. So this was a treat to see her return to such a funny and enticing type of character. Jason Segel, (most notable from the hit television show “How I Met Your Mother”, playing Marshall Eriksen) as always, was a sensational male lead, bringing the hilarity he is commonly known for. Practically a cult fan of Segel myself, I had high expectations for the film just going in; thank God I wasn’t disappointed.

Objectively, I worry that this type of a flick, you will either love or hate. It is the sort of movie that you REALLY have to suspend your disbelief or else the entire time you will be thinking, “this is stupid, ludicrous, pointless, etc.” At one point in the movie, to pick up Miss Piggy from Paris, they hop into a car and literally cross the ocean on a map and end with them arriving on a beach with the car coming up from underwater. So honestly, don’t go see the film if you plan to judge it’s ridiculous humor mercilessly. It’s heartfelt, family friendly, and overall worthy of it’s 96% on Rotten Tomatoes. Obviously, “The Muppets” are timeless characters that don’t age with their fan base; their fan base is born in every new generation. I’m proud to say that I am a Muppet fan for better or for worse. Go see it or not.

The choice is yours. 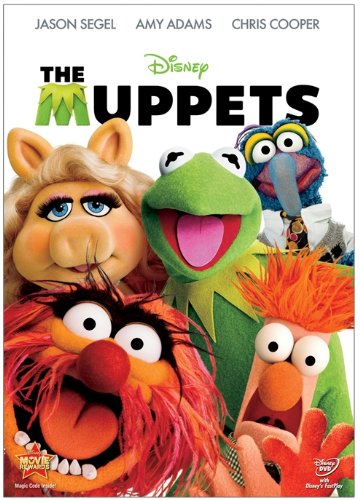 
Buy from Amazon Available on iTunes
The author's comments:
I write for my school's online blog and I was proud of this piece so i thought i'd post it here.
Post a comment
Submit your own

Favorite Quote:
Love is louder than the pressure to be perfect.

View profile
I absolutely agree! I went to see this movie with my family and we all loved it. It had the perfect amount of comedy in it and everything else was fun. Nice article!