The Adventures of Tin Tin

“The Adventures of Tin Tin”- based on the famous comics by Georges Remi is a faithful animated adaptation that will leave fans hungry for more.

The movie follows the adventure of the crime-fighting journalist Tin Tin (voice of Jimmy Bell) and his dog Snowy when they are thrust into the middle of an exciting adventure. The only problem is that this adventure is highly dangerous and potentially deadly. In this they have to fight, steal, and run from thugs and villains.

For those of you who are fans of the comics fear not. This movie is extremely faithful to the comics it is based on The Crab with the Golden Claws, The Secret of the Unicorn, and Red Rackham’s Treasure.

Although an animated movie might not be very appealing to adults who for some reason think that animated movies are only for kids, this action packed movie is perfect for all ages. You will be immersed into the vivid animation and fast paced adventure that the movie offers.

This movie is accomplished producer Peter Jackson (Lord of the Rings) and director Steven Spielberg’s (E.T, Jaws, Jurassic Park) first dive into the animated genre. The result is fantastic. The animation is so realistic that many times during the movie I had to question whether what I was watching was real or not. The style was unlike anything I had ever seen and in my opinion was better than many other styles that are used by Pixar and Disney. The style is colorful and dynamic and fits the mood of the film well

The other supporting voice actors in the movie are also sensational and deserve recognition, Andy Serkis as Captain Haddock, Daniel Craig as Ivan Ivanovitch Sakharine and Nick Frost and Simon Pegg as the twin detectives, Thompson and Thompson are perfect for the roles they play.
The music, written by the famous John Willams is key to the movie and the music is fast paced and keeps you on your toes wondering what will happen next. The music fits scenes perfectly, slow and dramatic when the villain comes in, fast and mysterious during sneaky scenes.

All the pieces fit together in this masterful work of art and this movie brings the comics alive with exciting action and vibrant animation. The action and hilarious comedy will appeal to everyone, big or small. 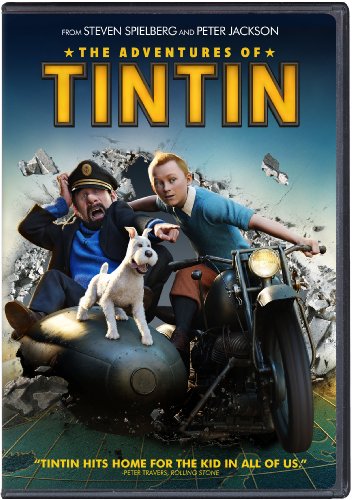 Favorite Quote:
"Life is a system of balance. One thing will always be accompanied by a proportionate level of its counterpart. Happiness is more valuable when interrupted by periods of sadness." ~Bruce Stonemills

Very well done review! I was and am a huge fan of the Tintin comics and so I was extremely excited when the movie came out. I think they did an excellent job of mixing together the plots of several different books to make one circuitous plot.

I expected just as such from Moffat, though. Steven Moffat is quite the screenwriter/producer/director.

Kudos to you for an excellent article!