“Time travel has not yet been invented, but thirty years from now it will have been.” These words kick-start one of the grittiest science-­fiction films of all time, and it never lets up – not even after the credits roll.

“Looper,” skillfully written and directed by Rian Johnson, is about Joe (Bruce Willis), a looper (or assassin who works for big, organized crime syndicates in the future). In 2044, in an America where the economy has collapsed, the mob of the future illegally uses a technology that was banned the moment it was created: time travel.

Loopers are sent back in time to kill the desired targets and collect their pay (silver bullion). But they have a contract; when the mob wants to cut ties with anyone not in their tight-knit group, they send back the looper's loop (future self) to do what's called “closing your loop.” But when Joe's loop escapes, Joe's world is turned upside-down as reality begins to unravel around him.

Joseph Gordon-Levitt, who plays the younger Joe, does such a great job filling the shoes of a lost soul that if he's not nominated for an Oscar or Golden Globe, I'll be surprised. I've never seen a more captivating performance. Willis does a fantastic job as well, shifting the playing field and bringing the chaos in what is easily his best role since “12 Monkeys.” Emily Blunt is a surprise as Sara, a mysterious character who is introduced in the second half of the film but has a major impact on the story.

The writing is Oscar-worthy, as is the directing. The music by Nathan Johnson blends in with the intense action sequences and the emotional ­dialogue; it pays a great homage to Hans Zimmer and Harry Gregson-Williams. The visual effects are noteworthy as well (especially for such a below-average-budget film) but fall short of being as ground-­breaking and realistic as “Prometheus.”

Overall, “Looper” is an instant sci-fi classic and one of the best films of 2012 – a mix of “Blade Runner,” “The Departed,” and a dozen other classic sci-fi/action thrillers.

This film is rated R. 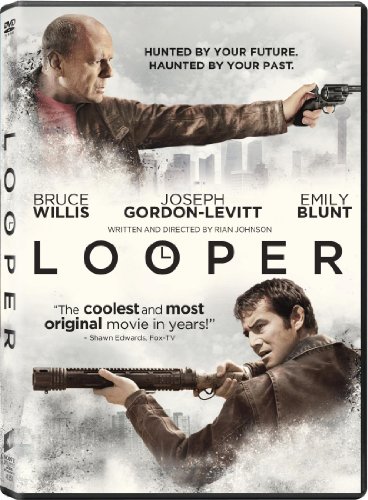 View profile
There have been plenty of science fiction films or films with science fiction elements released that have been truly amazing (Inception, Love, Cowboys & Aliens, and Prometheus), but Looper was a perfect, a truly perfect blend of crime and science fiction. "The Departed" meets "Blade Runner"
TroyMcClure said...
on Jan. 11 2013 at 12:21 am
Thanks for taking the time to review Looper for us, Alan! I missed Looper while it was in theaters; however I finally got the chance to see it last night. I like to go online to look for new rentals before I leave my office at DISH yesterday afternoon. I saw that Looper was available; I rented it, and had it downloading to my DISH Hopper DVR as I walked out the door. It was loaded and ready to watch before I got home and turned on the television. I totally agree that this movie is a classic. There are so many overblown science fiction movies that come out, that a small film with a big idea like Looper is a breath of fresh air.