Due to average American or adult ideology, animation is usually a film genre reserved for the callow cartoons or those of little cognitive comprehension or critical cinematic appreciation. However, Spirited Away is the silence to that question and the harmony, suppressing all scoffers is a final hush reached in the aftermath of an awing symphony.

Described as the master of masterpieces, Hayao Miasaki is undoubtedly one the world’s greatest creators of animated films in the world, probably taking place as one of the greatest directors in history, generating renowned pictures, such as Castle in the Sky, Princess Mononoke, and Howl’s Moving Castle. Spirited Away, the combined product of Studio Ghibli and Walt Disney productions, is the tale of a sulky young girl called Chiriho* (What a pretty name) moving to a new town, who visits an abandoned amusement with her family and unwittingly finds herself in the spirit world, facing witches, soot spirits, and dragons, OH MY. Spirited Away flawlessly creates a fantasy that touches reality, complementing the films with realistic touches of life, in a catch of light or serious themes of consumerism, greed, and environmentalism.

Miasaki truly outshines Disney into almost every aspect of animation, ignoring the belief that children cannot handle serious topics, and breaking the common cliché of Disney’s impossibly beautiful female protagonists characters that always get the prince. Though Chiriho is initially a spoiled and petulant ten-year girl, she comes to rely and strengthen her innate sense of courage and kindness in order to save herself and the people she loves. Unlike most fairytale heroes whose mission is the acquirement of love or the battle of good versus evil, Chiriho’s is that of accommodating the wisdom to survive and gaining maturity.

Inspired by the classic Alice in Wonderland archetype, in the captivating metamorphosis from child to adult, Spirited Away is the epitome of Miasaki-san’s career, spanning across several cultures and achieving highy acclaimed accolades, including 2002 Oscar for Best Animation. A fundamental of anybody’s cinematic education or enjoyment, Spirited Away is nothing less than magic


* Chiriho- One who asks a thousand questions 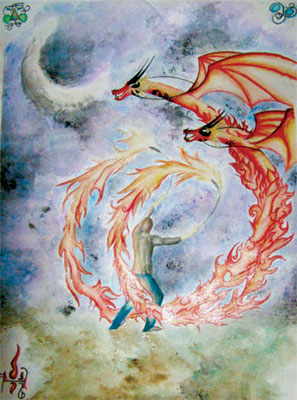