Pacier than any action film and more thought provoking than the usual indie flick, Whiplash is nothing short of a feat of cinematic alchemy. The film follows ambitious young jazz drummer Andrew Neiman (Miles Teller), and his relationship with Terence Fletcher (J.K. Simmons) the most respected- and abusive- professor at the prestigious Shafer Conservatory Music School that Andrew attends.

What was particularly masterful about the film was the way it danced lithely around all the potential pitfalls- the film became neither a battle cry nor a caution for the “tiger mum” movement, choosing instead to present a grey tale with lines blurred, leaving the audience to wonder whose drive was the most influential in Andrew’s journey- Fletcher’s or his own. Simmons, in a performance that earned every golden inch of the Oscar statue, managed to navigate the choppy waters of the “overseer instructor” character archetype without so much as dipping a toe into the realms of caricature.

Miles Teller’s performance was truly extraordinary. He managed to effortlessly convey the self-confident and driven Andrew without veering into the lands of the cocky and obnoxious. What was remarkable was the way he maneuvered Andrew’s character arc from start to finish. He managed to start him off as a shy, unconfident boy, but still assured of his own abilities, and transition him into a single-minded force of nature that was prepared to annihilate everything- including himself- that stood in his way. Teller also managed to act as a vessel for the audience- we could feel ourselves playing till our hands bled and we felt nauseous. Finally, a special shout out must go to Teller’s incredible facial expressions, which deserve an Oscar all to themselves- with his slight smiles, intent eyes, screwed up foreheads and various “Teller-isms” he managed to put the icing on the cake that was the best performance of his career.

What was truly incredible about Whiplash was the fact that the entire film felt like a living creature, with Andrew’s journey as it’s beating heart, and the omniscient drum beat as it’s throbbing pulse. Watching Whiplash felt like you were playing the drums with Andrew’s fervour- fast, furious and to the point of oblivion.

Whiplash, true to it’s name, left me reeling and giddy, stunned by the force of what I had just seen. It is this effect that has catapulted the low-budget under-the-radar flick into the Oscar limelight, and my god, it deserves it. 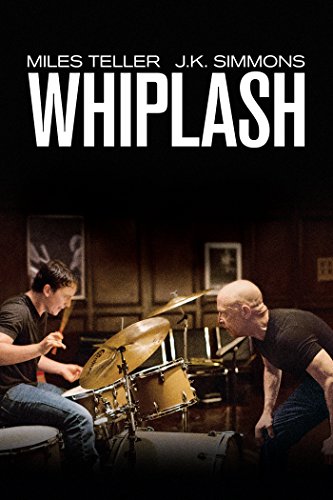