A year after the Hunger Games, Katniss Everdeen (Jennifer Lawrence) can't return to her old life. True, her family now lives in the oppulent Victor's Village, well-fed and clothed, but between a still in-love Peeta (Josh Hutcherson) and alchoholic Haymitch (Woody Harrelson) as neighbors, that's a hard thing to be thankful for. Especially with the victory tour coming up. Once again, Katniss and Peeta will be paraded before Panem, their survival and love story glamorized and flaunted before the world. Katniss, for her part, just wants to get through it and live happily ever after.

But her actions in the arena have made her a symbol of hope for the districts. Hope and rebellion.

As punishment, President Snow (Donald Sutherland) initiates the third quarter-quell with a special announcement: Arena veterans are the only ones to be reaped.

This is the movie where the ball really gets rolling. In the first film, Katniss' actions seemed to make little impact, but in this film they're revealed as world-changing. This time the fight goes beyond the Arena, and the enemy isn't the tribute standing before them.

Peeta and Katniss both have self-sacrificial love for each other, even though love is a nearly forgotten concept in Panem. Other tributes also have love for each other, including a flirtatious Finnick (Sam Clafin) and his elderly mentor (Lynn Cohen). Tributes repeatedly put themselves in danger for eachother's sake. Katniss' tailor brands himself a rebel and suffers persecution to inspire the downtrodden with accenting Katniss' inner strength.

Upon hearing of a rebellion stirring, Katniss' friend Gale (Liam Hemsworth) refuses to run away or help her in running.

As usual, violence is a major factor in these films, though there is considerably less done by humans to humans. Monkeys attack people, there's a near-drowning scene, people get electrocuted. Outside the arena there's a couple of mob sequences, house-fires, a public whipping and execution. There is mention of a suicide. Katniss hangs a manekin symbolizing a former game official.

After the tribute parade a tribute strips down on an elevator. There are still a couple immodest gowns.

A pair of arena veterans are drug-addicts, and of course Haymitch is still drinking. Katniss comes to him saying she wants to get drunk.

After a nightmare Katniss asks Peeta to get into bed with her (both fully clothed). Another tribute says that everyone wants to sleep with Peeta.

Conclusion: Rebellion is rising. And it only takes one person to change the world. Just remember who the real enemy is. 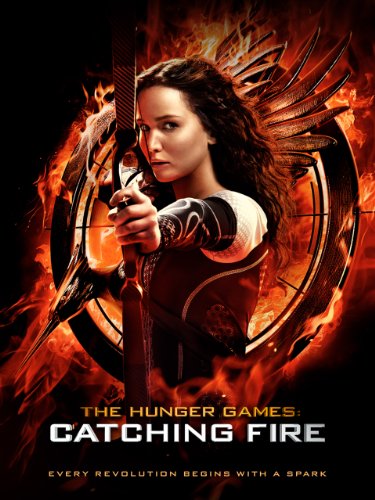