The Prince of Egypt | Teen Ink

The Prince of Egypt

Prince Moses  (Val Kilmer) has the best life one could wish for. He lives in a palace, has parents and a big brother (Ralph Fiennes) who love him, servants, horses, and chariots at his command, and the freedom to do whatever he wants. The one shadow on his life is that of the slaves. Millions of Hebrews suffer under their cruel Egyptian task-masters every day to raise Egypt to glory. Not to mention the slaughtering of thousands of male Hebrew babies under the pharaoh's command several years ago. When Moses realizes that he, a Hebrew by birth, was intended to die with the others, he leaves his family, pondering why he was saved at all. The answer comes from a burning bush.

"I have seen the oppression of My people in Egypt, and have heard their cry. So I shall stretch forth My hand and lead them out of Egypt, into a good land. A land flowing with milk and honey. And so, unto Pharaoh, I shall send you."

One of the most painful elements of the latter part of the film is the fact that beforehand we see how close Moses and his 'brother' Rameses are. Though they bicker, it's evident that they love each other very much.

Moses risks his own life to save others and obey God's orders. Even while times are at their worst, his sister Miriam is faithful and supportive, and in the moment where every road seems to lead to death, the most skeptical Hebrew steps forward to trust God's promises, leading the others on.

While deviating slightly from the Biblical record, most of it is done to fill in the blanks concerning the identity of Pharaoh, the personalities of characters, etc.

The grand theme of this movie is God's awesomeness. Even during sequences where it seems like evil is prevailent, God wins, hands-down, every time. We'd like to thank everybody who lost.

Some creative license has been taken with this story, though not too extravagantly.

Tzipporah wears a dress with high-slits when first shown (though, in all fairness, she was forced into it most likely). There is a scene where, after weeks in the wilderness, Moses is rescued and thoroughly washed by a group of women. Jethro interrupts this with his daughters peeking through the tent flap behind him. Nothing too inappropriate is shown.

Of course, there are the plagues, which, while not showing much violence, contains images of rivers of blood, flaming hail, insects swarming over people, and disease afflicting the Egyptians. There is a nightmare sequence showing the slaughter of Hebrew babies (shown in hiroglyphics). The slaves are beaten and whipped, and the men wear basicly ragged underwear.

Result: An extraordinary film for both children and adults. Watch this as soon as possible! 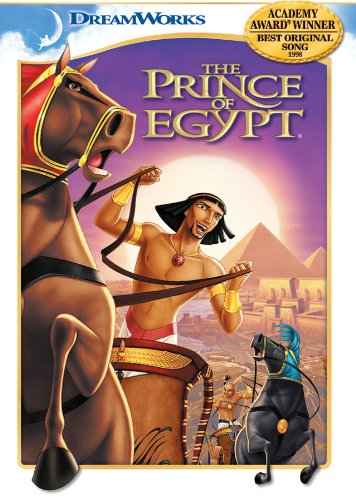 "Rameses, you bring this upon yourself..."