After the events in the Avengers, Steve Rogers (Chris Evans) seems to have found his place in the modern world, serving S.H.I.E.L.D. to protect the world from terror and war. But he still has some reservations. He's from a time when warfare was more straighforward and moral, Director Fury's commands, Agent Romanoff's actions, and the helicarriers set up with over a hundred machine guns capable to kill any possible threat to S.H.I.E.L.D don't seem to follow either of those standards.

Then one night Steve comes home to find Nick Fury (Samuel L. Jackson) sprawled in his armchair with a message: S.H.I.E.L.D has been comprimised. That's when the bullets come through the wall and Steve comes face to face with a man with a metal arm: the Winter Soldier.

Steve/Captain America is focused on protecting others and upholding morality and freedom, which brings up the plot of the film: What is freedom? And how far are we willing to reach to attain it?

It's also a movie about friendship and compassion: When Steve finds out that a friend is in the midst of the conflict, he does all in his power to save him, to the point of sacrificing himself.

Sam Wilson, a retired solider, hides the refugee Captain without question and volunteers to help in the action.

In an attack scene, Natasha moves Steve and Sam out of the way of bullets and warns civilians to get away while they can.

Even when Steve fights, he opts not to kill his enemies, despite what they may have done to him or others.

Fury hesitates to shoot a villain who is physically threatening Natasha.

There is a bit of violence (as usual), and sometimes innocent civilians are the victims. Characters are shot, stabbed, electrocuted, and (in one instance) tortured (no blood is shed or bones broken).

There's a bit of language as well.

Natasha shows Steve a scar on her stomach and quips: "Bye-bye, bikinis." to which he responds, "Yeah, you probably look terrible in them now." Natasha wears a couple low-cut shirts. In an attempt to disguse themselves from pursuers, Natasha and Steve have a long kiss in public.

A modeling dummy is shown without clothes, but a shield covers the lower half. A politian speaks about wanting to sleep with a reporter. A female agent talks about spending time with Steve but seems a bit disappointed when he suggests drinking coffee togehter.

Result: A great, though slightly darker, hero movie that should evoke deep questions for all. 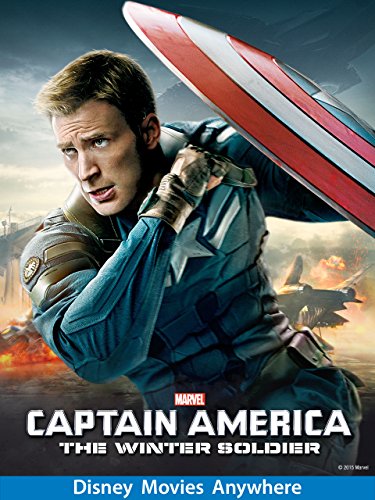