Inside out | Teen Ink

Have you ever heard the phrase, 'her emotions are out of control'? Well, for Riley, they are. Her personified emotions of Joy, Sadness, Anger, Fear and Disgust are scrambling to get evereything in order after Riley's core memories, the elements that define her personality, get lost. Joy and Sadness recover the memories, but find themselves lost in the vast world of Riley's imagination and memory. Now it's a race to get back to the control tower, before Riley makes a decision that could change her life forever. And it's Joy's top priority to keep Riley happy, something that Sadness just doesn't seem to understand. Why is she even there?

This film points out that the emotions shouldn't always be set on one, but all the emotions have a place and a purpose. And one would think that sadness, being the apparently useless emotion, would be the villain, attempting to gain control. But there is no real villain here. In fact, all the emotions (and Riley's imaginary friend) are working to save Riley, sometimes at the risk of their own existence.

Riley and her family have a truely good relationship, with fun and encouragement always ready.

The script flows well, acting is great, and the score is a subtle compliment.

There is a memory of Riley as a baby running around the house naked (her back is mostly shown). Anger gets excited over being able to use swear-words. The result of disgust, fear and anger being in control is a fight between Riley and her parents. Riley's mother's emotions fantasize about the memory of a hairy, muscular Brazilian helicopter pilot when things get rough.

Result: Go for it, but bring tissues. 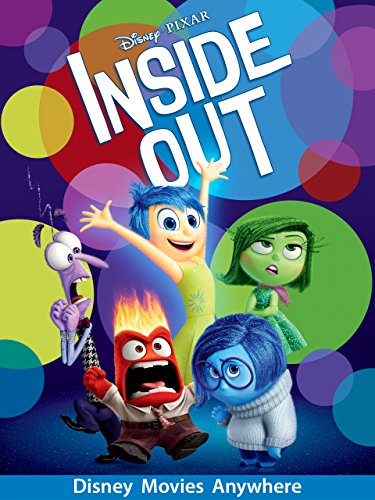 "It was amazing! Just me and Riley, forever! Um, for thirty-three seconds."