November 5th was a date to remember for Britain. It was the day that Guy Fawkes got hanged for trying to rebel against the British Government. It was the day where V blew up the Old Bailey, but most importantly, it was the day for all the men and women who believed in power to the people, to gather in front of the gates of Parliament, along with V, to get rid of England's government.
England is set in a time where they have absolute power, where they have the right to do anything, where their people have a curfew, and where no one is permitted to say a word. V is a vigilante who believes that people should not be afraid of their government but that instead the government should be afraid of their people. Following the example of Guy Fawkes, he will attempt to destroy England's Parliament.
V will encounter a woman named Evey who is herself going to help him into making England a better place. Along the way, she will truly discover how to “feel” things and will also discover V's personal aspect in the plot. Events start connecting to a past St. Mary's incident involving many dead as the plot thickens with a series of flashbacks that are all put together again.
The trailer gives a misrepresentation of the actual movie and does not deliver its true concept. V for Vendetta is not just another knife and blade action movie but a great thriller that builds up until the final date: November 5th. The dialogue is definitely something to pay attention to and I recommend this movie to anyone who is in for a new type of movie. 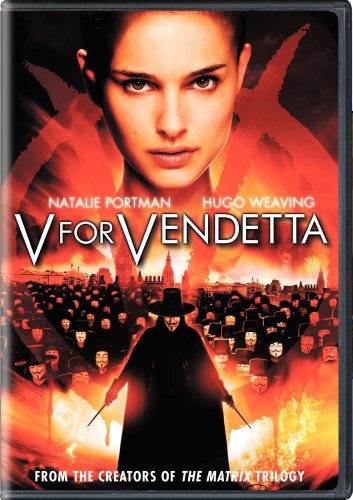