My Chemical Romance - The Black Parade

I'll never forget walking into Target with my aunts, anxiously waiting to get four new CDs for my birthday. I didn't know all that much about the bands whose albums I was getting, but I didn't really care. CDs weren't something I got often at the time.

That day, I had gotten four CDs: Infinity On High by Fall Out Boy; Echoes, Silence, Patience and Grace by Foo Fighters; DECEMERUNDERGROUD by AFI; and, probably my most memorable one of them all, The Black Parade by My Chemical Romance.

I remember listening to the CD, thinking about how cool it was. The next day, I had gone completely berserk over the whole thing and proudly announced that I had discovered the greatest song of all time, “Welcome To The Black Parade.” Of course, I had over-exaggerated a bit, but to this day, it's still my favorite song.

When you hear the first song and listen to unique vocals of Gerard Way, it will most likely remind you of some kind of formal gathering back in the 1800's. Or, at least, that's what I pictured. “The End.” is a slow-moving, awkward song with a tiny bit of Broadway influence in it. Right afterward, it kicks directly into the very fast-paced, very heavy, very punk-ish song, “Dead!” It's a very fun song, and it immediately shows off lead guitarist Ray Toro's shredding skills . After “Dead!,” the CD plummets you right into the darker stuff, consisting of the metal-tinged “This Is How I Disappear” and the extremely catchy and spooky “The Sharpest Lives.” “Welcome To The Black Parade” starts off as an old-school sounding, piano-based song, then kicks into something totally different as it starts playing the fast, “hooky” verses and chorus. If there was one song to best describe the album as a whole, it would be that one. Not only are there plenty of guitars, but they also have chimes, xylophones, trumpets, and many other instruments not normally included.

Things slow down a bit when “I Don't Love You” comes on. You can almost feel the pain in his voice as he sings, and it shows off Frank Iero's ability to come up with cool guitar melodies during the verses. Then things speed back up and Bob Bryar pounds on the drums, indicating the beginning of the mischievous-sounding “House Of Wolves.” And for all you Beatles fans out there, the slow rhythm, piano parts, and moving lyrics of “Cancer” most likely won't disappoint you.

My Chemical Romance spiced things up with the more Broadway-ish, yet still rock-like “Mama.” They even got Liza Minelli to sing on the bridge and at the end! And if you think a song called “Sleep” will actually make you fall asleep, you're sorely mistaken; and you'll realize that once you hear the song. And, of course, it wouldn't be My Chemical Romance if they didn't include something goofy. “Teenagers,” a funny, playful song Gerard Way wrote about... well, teenagers, has an anthem-like tune and gives the album back it's fun edge. “Disenchanted” is often forgotten by fans, but has a great guitar melody and is, again, slower, but still contains heavy guitars.

The album certainly ends with a splash, as “Famous Last Words” rings in your head the rest of the day. Again, showing off amazing guitar skills, they also have an unforgettable chorus that makes you want to never give up hope. In fact, I can always go back to the song when I need cheering up or determination. “Blood,” another silly track, is only a hidden song about a minute long and was obviously purely made just to cause laughter.

The Black Parade is mostly pop/rock/punk based, but you can hear other influences from heavy metal, Broadway, classic rock, etc. All the melodies are very catchy, and, even though mostly rock/punk fans will like this, I think most anyone can listen to this and enjoy it. There are a few profanities thrown around here and there, but if you look beyond that and listen to what they're really saying, you might find much meaning behind it. The band members consist of the Jersey boys Gerard (vocals) and Mikey Way (bass), Frank Iero (rhythm guitar), and Ray Toro (lead guitar), and Bob Bryar (drums) from Chicago. They all put their own influences to the album to make it truly a joy to listen to. Hopefully, you'll listen to the album and, like the band, it'll make you want to make a difference in something or someone. 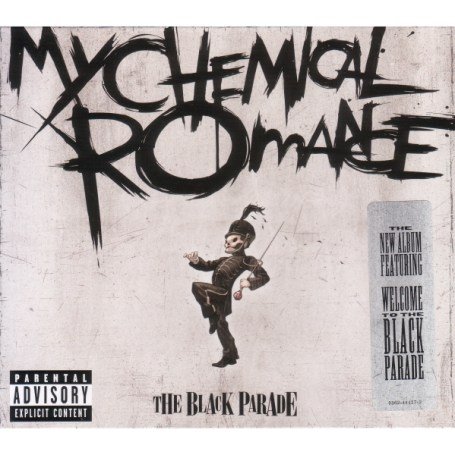 Favorite Quote:
The world is gonna try and clean you up, what are you going to do about it? They're gonna try to make you pretty,

I love MCR with all my heart, but I think that their first album "I brought you my bullets, you brought me your love" was their best. Their recording is kind of rough, but you can steal hear Gerards' raw, powerful Vocals, Franks' steady rhythm, and Rays' shredding abilities. It's darker than any of their other albums, but it's by far one of their most beautiful albums.

Favorite Quote:
"Education is an admirable thing, but it is well to remember from time to time that nothing that is worth knowing can be taught."
Oscar Wilde

View profile
Great review! The Black Parade is an amazing album, there is so much emotion and meaing in every song!
callie15 BRONZE said...
on Aug. 2 2011 at 7:35 pm
callie15 BRONZE, North Plains, Oregon
3 articles 21 photos 424 comments

View profile
I have just began to listen to this album, and I have to say it is one of my favorites, too. The songs "Welcome to the Black Parade" and "Famous Last Words" are my favorites songs, but I have to say that "Famous Last Words" takes the cake. But I love all of the songs, and certainly reccomend this album to everyone. Great review :)
Vexa_Rave SILVER said...
on Jul. 18 2010 at 9:09 pm
Vexa_Rave SILVER, Mt. Clare, West Virginia
9 articles 0 photos 57 comments
View profile
well i just meant bad stuff in general, like getting drunk on stage and making fools of themselves.  Gerard was definitely the worst, though.  he called his tour manager (i think that's who he called???) during the Three Cheers tour and said he was going to commit suicide.  O.o  that would've been tragic! and totally right on the Jesus thing, lol!  :)
SmileKid:) SILVER said...
on Jul. 7 2010 at 9:33 pm
SmileKid:) SILVER, Citrus Heights, California
9 articles 2 photos 33 comments

View profile
i also like the afi cd u got i always steal it from my sisters car=p
SmileKid:) SILVER said...
on Jul. 7 2010 at 9:31 pm
SmileKid:) SILVER, Citrus Heights, California
9 articles 2 photos 33 comments

View profile
Great article, but i must disagree with one thing, this was not their best- Three cheers for sweet revenge was, the passion and emotion drippping from each song and the story of love in twined amazing- this alblum has a good story and i love it and MCR too but eh, i'd rather listen to 3 Cheers or bullets before the black parade.
MCRlover2011 BRONZE said...
on Jul. 1 2010 at 11:20 pm
MCRlover2011 BRONZE, Kemp, Texas
4 articles 2 photos 85 comments

View profile
The whole band didn't do drugs, Gerard was the only one really heavily into drugs, the other boys just drank if i'm not mistaken.
RaoulDuke SILVER said...
on May. 5 2010 at 10:21 am
RaoulDuke SILVER, Florissant, Missouri
7 articles 0 photos 5 comments

View profile
I love this cd espically the track mama
Vexa_Rave SILVER said...
on Dec. 27 2009 at 1:13 pm
Vexa_Rave SILVER, Mt. Clare, West Virginia
9 articles 0 photos 57 comments
View profile
Yeah I guess they did. It was moreso that Gerard had a lot of emotional issues, and everyone in the band later got involved with drugs and stuff. But they all quit before this album. :) I could give you a whole biography on them. XD
SmileKid:) SILVER said...
on Dec. 15 2009 at 10:43 am
SmileKid:) SILVER, Citrus Heights, California
9 articles 2 photos 33 comments

I&#39d also like to thank you for your kind words in regards to my story, Vampires Will Never Hurt You (I Promise). It means a lot to me that you liked it, it really does.

By the way, Famous Last Words is my favorite, hands-down.