“I guess it's time for you to hate me again,” Eminem states in the chorus of “Medicine Ball.”

It happens at least once in every artist's career: they go on a hiatus and then burst back on the scene with their best album yet. Green Day did it with “American Idiot,” and the Red Hot Chili Peppers had “Stadium Arcadium.” Now, it's Eminem's turn with “Relapse.”

What has he been doing for the past five years? For the most part, unfortunately, dealing with drug addiction and depression. And that's the focus of this album.

Most of the time, when he isn't referencing his addictions, the rapper is simply venting his frustrations from the past five years. This was a common theme in past albums. But here, instead of simply being furious, Eminem seeks a resolution through his music and himself.

Songs like “My Mom” (in which he blames his mother for getting him hooked on Valium) and “Beautiful” (challenging listeners to take a walk in his shoes and experience his pain first-hand) are utterly heart-breaking and reinforce how hard this guy's life has been.

The album as a whole is pretty good, as long as you remember these are just songs. I wish I could say that there's some subliminal message or hidden symbolism, some sort of mind trick he's using to control kids, but I can't. He's just trying to make you mad, and it works every time. And I can't figure out why we get so angry at him. He's not the first rapper to use violent or controversial lyrics. That said, I wouldn't let anyone under 16 listen to this disc. It is all about Eminem finding an outlet for his anger, pain, and frustration. He's clearly found it; it's really his outlook on life that needs work.

Where this album shines, ultimately, is in the delivery. Rapping is, for the most part, an acquired talent, but it takes skill to do what Slim Shady does. Eminem has always been a hate-him-or-love-him kind of artist. Either way, he continues to find success, and I sometimes think even he wonders why.

“Relapse” is, without a doubt, one of his most grueling, offensive, obscene, vulgar, gratuitous, graphic, and, yes, one of his best albums ever. Oh, and it was executive produced by Dr. Dre, as if you needed another reason to buy it. 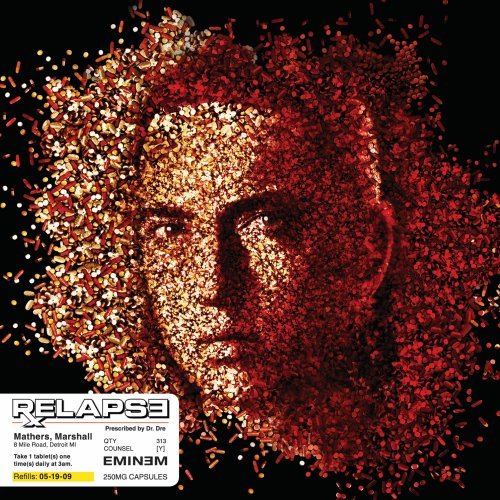 Favorite Quote:
You can quote me on that.

Favorite Quote:
this quote was said by Chris Jericho he said people who bring you down have failed in life and when you realize it he was right i thank you plenty

View profile
Good point & i agree. I said I wouldn't let them listen, because even though I'm a fan & I really like the album, it's got a lot of content I wouldn't feel comfortable letting my little brother or sister listening to. But yes, I believe the child & parent should both be actively involved in the music they listen to & make their own decisions.

Also, Eminem's songs are very good for therapy. When I would get angry, I would always put his songs on. What I should've said is, only those of a mature nature should listen, because my dad let me listen well before 16 because he knew I was mature enough to realize they were just songs.
Diabetic_Wonder GOLD said...
on Nov. 3 2009 at 7:47 pm
Diabetic_Wonder GOLD, Michigan Center, Michigan
14 articles 11 photos 25 comments

Favorite Quote:
"You know you're in love when you can't fall asleep because reality is better than your dreams" ---- Dr. Seuss

View profile
why shouldn't people under 16 listen to this album? If they want to listen to it, then it's there decision. Personally, I think this album can help a lot of teens if they get the main message of most of the songs.