One of my new favorite movies directed by one of my favorite directors, Tim Burton, has captured my complete attention with its creepiness, fantasy, and OUTRAGEOUS plot and characters! The soundtrack Almost Alice is one of my new favorite soundtracks too. It’s a great soundtrack, and there are a few songs on there that just blow your mind… And others that just make you want to gash your ears out… Alice, the first track of the soundtrack, and a song written and sung by Avril Lavigne, seems to fall into in between those two. Avril Lavigne has proven to be a great vocalist and artist, and I truly am a fan of hers. I liked the song, but it was a little disappointing, especially for being the opening of the soundtrack.
First of all, the vocals were somewhat unpleasant. Avril demonstrates her great vocal ability and capacity, yet at the same time, she sounds like a dying animal with a high pitched voice in the most part. She has a strong, powerful voice that seemed to falter in this song in certain parts. But her ability to shift pitches is something to be admired. The “fade in-fade out” kind of sound at the beginning was kind of new. Sometimes, when I’m listening to this song I think to myself, “Is something wrong with my speakers/earphones?” It would be nice to see that cut out, or just improved. Avril’s piano playing was excellent during the song, and the instrument playing and sound of the song definitely gave off vibes saying “Alice in Wonderland!” The lyrics were very relevant to the movie, though in some verses it seemed like Avril was just desperate for a few words to rhyme. But the outcome was great. However, the lyrics and vocals sounded like they lost the rhythm and flow with the instruments.
The official music video for Alice is a very genius video with very few defects. One of the main things I liked from it was that its setting gave the video the image of a Gothic Alice in Wonderland. In the video, the gorgeous Avril Lavigne stars as Alice herself. The video starts off with a quite adorable, white rabbit hopping along in a meadow on a mildly dark, clouded day. Avril, or Alice, is walking through the meadow as well and sees the rabbit hopping off to go through an arch of large, green trees that leads to the forest. Curiosity gets the best of Alice, so she follows. The video demonstrates many elements from the movie which is good. When Alice enters the forest she is searching for the hidden rabbit so she is unaware of where she’s walking and falls down the rabbit hole. From then on you see a clip from the actual movie of Alice falling down the rabbit hole as well. The music video adds clips from the movie and makes the video flow very easily due to Avril-Alice’s acting up to the point in where she supposedly experienced it herself and demonstrates it by using the movie clips. Examples of that are when she walks into the Mad Hatter’s tea party and when she falls down the rabbit hole. One thing that really bothered me from the music video was that when Avril’s vocals from the song sing in a very passionate, powerful manner, but Avril doesn’t move her mouth like she would usually sing it. Instead she moves her mouth like she would if she would sing a very soft, mellow song. And no, this isn’t one of them. However, Avril-Alice wore a splendid dress that looked like it was made from black velvet that made her look like a Gothic Alice (I LOVE THE GOTH), which I give two thumbs up for. Avril Lavigne could definitely capture and act out Alice’s feelings of confusion, fear, delight, and wonder of being in Wonderland. I had no idea she was such a great actress, she could probably replace the current actress acting out Alice in the actual movie. This video has been one of the most creative music videos I’ve seen in a while.
Almost Alice and Alice in Wonderland was very honored to have an artist such as Avril Lavigne on there, although the song she composed for the soundtrack, Alice, is a great song, yet somewhat disappointing in some form or another. I give Alice, the song, by Avril Lavigne a 4 out of 5, and the official music video a 4.5 out of 5.
Click on my quote on the bottom to see the official music video of Alice. 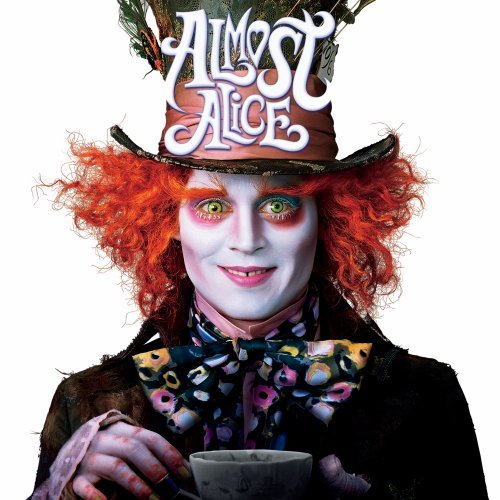 
Buy from Amazon Available on iTunes
The author's comments:
This piece is in my blog too. There hasn't been much movement there, but the link to it is: