Favorite Quote:
"One day I'm gonna run away and never come back and when I come back I'm gonna be the knife master" - Jimmy The Rev Sullivan. Not much of a deep meaning but it makes me laugh.

Nightmare is the 6th studio album from Long Beach California rocker’s Avenged Sevenfold. It’s also their best work yet. As any fan of Avenged Sevenfold will know their drummer, Jimmy “The Rev” Sullivan, passed away while making this album. After that there was talk of the band splitting up and not finishing the album. Well finish it they did. So what we have now from all their hard work is one excellent CD. It’s not often that I can sit down and listen to a whole CD by one artist and not get bored. With this album I can listen all the way through every day and still love every track.

Im going to do this review in a track by track format. So lets get on with it!

Track 1- Nightmare- Nightmare was the first big single off of the album and it’s a great way to get the album going. After the quiet and creepy intro, Double bass and heavy guitars kick in and you know you’re in for a treat. After the intro frontman M. Shadows yells “nightmare” and gets you pumped. The rest of the song is carried by groove like guitars and heavy drumming. The chorus is very melodic and features a background piano to carry it. As always the bands guitarist Synyster Gates delivers a great guitar solo.

Track 2- Welcome to the family- Another very popular song off of Nightmare. While I don’t find this track to be as strong as the title track, it’s still a good listen. The track has very catchy lyrics and a blazing guitar solo to keep it strong. The song also features great background vocal work from guitarist’s Zacky Vengence and Synyster Gates. The drums keep a simple but strong beat and support the song well. M shadows as always mixes yelling vocals with melodic, light vocals.

Track 3- Danger Line- Danger Line is a good track in the fact that it shows off just how versatile this band can be. It starts off with a simple guitar line and marching band like drums. Then we are treated to a sort of mini solo afterwards. When the song really gets going we have a catchy, fasted paced riff with some great lyrics from Shadows. Then near the end of the song a piano, trumpet and some string instruments kick in. The song then turns to a slower pace and we are treated to a slow and beautiful solo by Syn.

Track 4- Buried Alive- This is one of the most interesting songs on the album. It takes a lot of influence from bands like metallica but it doesn’t copy them either. The song starts with a solo from Synyster and then Zacky joins Syn to deliver some great sounding twin guitar work. From their the first half of the song is slow and a little sad sounding. This is more of a ballad song. Then after the first half Syn gives another blistering solo. The song then gets a very angry fast paced sound to it. A heavy guitar riff and some amazing screams from M shadows make you feel the energy of this portion of the track. This track is easily in the top 3 tracks of this album.

Track 5- Natural Born Killer- I don’t think this is a bad song but I feel it’s not as strong as most of the tracks on this album. The start of the song is very fast and exciting. However, from there we have a standard Avenged Sevenfold song. It’s not a bad song and it’s very listen able but most of the other tracks on this album are much stronger.

Track 6- So Far Away- Really. REALLY good track here. This song was written by Synyster Gates and was originally dedicated to his grandfather. However, after the passing of The Rev it was dedicated to him as well. You can really feel the sadness the band was feeling when they made this album. The acoustic guitars are amazing and synyster delivers one of his most beautiful solo’s to date. The lyrics are very sad and have a deep meaning behind them. Amazing track all around.

Track 7- God Hates Us- Now I remember when this song first came out how some people thought it was too controversial and, depending on your views, I can see why. However, I love this track. Now don’t get me wrong I believe in god and I’m not saying I love this because it’s called “God Hates Us”. In fact, I’m pretty sure the song a much different meaning then you might think. Now on the actual track. The guitar riff is heavy and reminds me somewhat of Pantera.
This is also the first song since Waking The Fallen where Shadows does almost all screaming vocals. The drums have a great bang to them and this is the moshpit song for this album.

Track 8- Victim- The acoustics are back again and they are still as great as ever in this track. The song starts off with a female soul singer and some gloomy sounding guitar work. Then the song picks up into a more light sound, but still sounds sad.. The lyrics are deep and suit the song well. A good settle down track after “God Hates Us”.

Track 9- Tonight The World Dies- Another good acoustic song. While I don’t find it as good as “Victim” I still love it. The song features great background vocals and catchy lyrics. The song is meaningful and it’s another song where the band expresses the sadness they feel.

Track 10 - Fiction- This is the most haunting track on the album. This was the final song The Rev recorded before he died. It’s the first song where The Rev does all the vocal work with Shadows singing behind him. His voice sounds amazing and the haunting sound of the piano will stay in your head for a while. The song features no guitar and has a light sound to it. It’s a sad song and hearing the voice of The Rev always gives me chills.

Track 11- Save Me- As much as I love fiction I’m going to have to say that this si the best song on the album. This 13 minute epic is the best way to close out an amazing album. We start off with a simple bass line from bass player Johnny Christ. Then the guitars sweep in. After the first minute of the song we hear one of the last lines The Rev recorded. “Skull”. Synyster then makes great use of the wammy bar and him and Zacky delivers amazing duel guitar work. Then Shadows comes in and from there it only gets better. Shadows gives us some of his best vocal work to date and the backing vocals are beautiful. The song mixes in many genres of rock and you never get bored. This is the song that I listen to over and over every day. At the end Shadows closes out the album by singing “Tonight we all die young”. The album ends nicely and you’ll want to go back and listen again.

Overall this is a great album. Every track is fun to listen to and this is Avenged Sevenfold’s best work yet 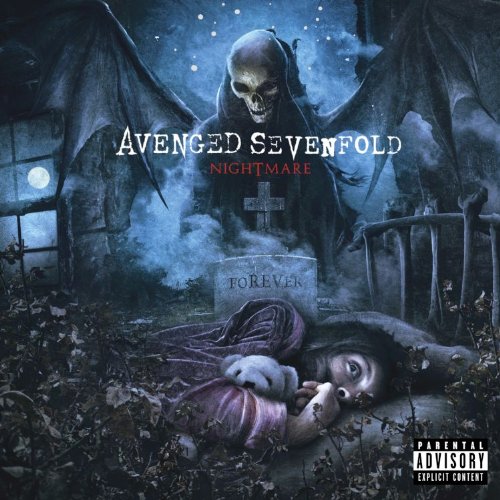 
Buy from Amazon Available on iTunes
The author's comments:
I love this album. This band is amazing and this album shows just hoe great they are!
Post a comment
Submit your own