While most celebrities maintain their identities in pop culture by conforming to the conventions of society, one will not find P!nk converging with today's superficiality. Instead, one will find her on the offense, confidently asserting her views, as in her album I'm Not Dead. While P!nk could have taken the conventional road in constructing her album like most artists, she chose to speak her mind, quoting, “I decided I was going to be me to the fullest extent, that my songs were going to reflect relationships I've had, things I've been through, and even the stuff I'm embarrassed about” (tv.com). She has proved herself, with her controversial lyrics and equally captivating melodies. Selling over million albums in the United States, I'm Not Dead, can be declared a success in providing food for thought.
Music serves a different purpose for every artist. P!nk's music is her unique expression of her memories, thoughts, and opinions. In her highly controversial song, “Dear Mr. President,” she speaks candidly about her views on the Bush administration. She asks him, “How do you sleep at night/How do you walk with your head held high?” Although a lot of people may harbor the same feelings, not many assert their opinions in a public forum. Furthermore, she does not just criticize him; she challenges him on a personal level. These challenges are almost attacks, shooting rhetorical questions at Bush in a way that is sarcastic but condescendingly diplomatic. Even though everyone may not agree with her view, the purpose of her music is to provoke honest discussion about stifling subjects.
Along with the highly controversial “Dear Mr. President,” P!nk released a couplet of equally controversial songs pertaining to society's perception of women and their roles. In her song, “Stupid girls,” she talks about the ambitions of young women to become famous by flaunting their bodies instead of using their minds. She even makes specific references such as, “What happened to the dream of a girl president? /She's dancing in the video next to 50 cent”. In her music video she goes on to mock the actual girl in the video as well as other celebrities including Paris Hilton, Jessica Simpson, and Mary-Kate Olsen. But that's not all. In her third single of the album, “U+UR Hand,” she partially attributes this behavior of women to the expectations of men. In the song she confidently rejects a man who is trying to pick her up saying, “I'm not here for your entertainment/ you don't want to mess with me tonight”. Her strong statement about the dynamics of men and women in today's society has certainly offended many people, and as in her intent, she received a response to its meaning rather than just the melody.
I'm Not Dead undoubtedly exercises P!nk's first amendment right of freedom of speech, which is what makes her album a top seller. It is the confidence in which she is able to assert her views that is so attractive, not necessarily her views themselves. If nothing else, P!nk must be revered for outspokenness in I'm Not Dead. 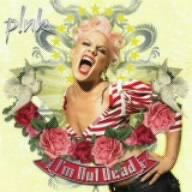