Stars - In Our Bedroom After the War | Teen Ink

Stars - In Our Bedroom After the War

The recent release from Canadian indie-rockers Stars, In Our Bedroom After the War, is the quintet's most compelling piece yet. The follow up to 2004's Set Yourself On Fire, it focuses more heavily on storytelling and imagery rather than the emotional turmoil and poetic lyrics that was Set Your On Fire. The tracks on this record all emphasize the meaning of the title, meaning that as long as you dodge the bullets, you're guaranteed to stay alive. It's the type of record that gets better with each track; it's only right to have to listen to this many, many times. With this, they supply us with material that came from the past seven years they've spent as a band and they use their flair for romance to their advantage by using unique vocal impressive vocal arraignments. So this pretty much makes up for the past three years they left us without anything new.


Armed with songs like “Personal”- a tale about a personal ad gone wrong – and “Midnight Coward'', they use their unique ability to use male and female vocals to their full advantage. Unlike their previous releases, this one is a bit more mellow, more calm. After three records, it's no surprise that they became a little less playful, but with age comes wisdom, which came make for great songs. “The Night Starts Here'', makes a great single, but becomes a bit repetitive with Millan crooning the same line at least more than three times, but nevertheless, the lyrics sure do make up for that. The sweet, sentimental ‘'My Favourite Book” find Millan singing about love. With a smooth, easy sound to support it, it's a but reminiscent of their hit “Ageless Beauty”. Other highlights include the U2-styled “Take Me To the Riot” starts out a bit slowly, but picks up a great chorus filled with booming symbols and perfect vocals picks apart the tension between the singer and the character in which he portrays. The most unexpected moment came in the form of the song “Barricade”, which has Campbell giving his most passionate performance yet, backed by a lone piano.


So whether it's a song about why personal ads aren't exactly the best way to go for dating, Campbell playing a dead-end pill-popping nobody, or simply a sweet love song, In Our Bedroom After the War is defiantly a must have for everyone. Its twists and turns full of drama that deal with the confusion and anxiety that comes with being in a relationship are accompanied with perfect instrumentation will satisfy any Stars fan or maybe make others fall in love with Stars. Key track – “Ghost of Genova Heights” 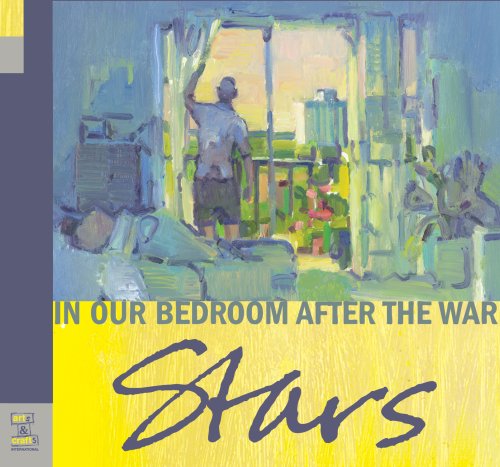