“No Mercy is the way of the fist!” the motto of thousands who know the band Five Finger Death Punch. Eight years and the knuckleheads are still towering over the competition with an iron fist. From the moment I heard this band I knew they were going to be huge, the face melting groove metal guitars are a part of “The Death Punch Sound” which makes their songs immediately recognizable. Their first release was 2007’s The Way of the Fist, since their groundbreaking debut, they have released four studio albums so far and haven’t missed a single beat since.

Five Finger Death Punch’s latest offering, The Wrong Side of Heaven and the Righteous Side of Hell (vol. 1),is beyond anything that they have done to this day, the songs are all perfectly crafted with a reasonable mix of the old and new. Five Finger Death Punch did a great job of making a well-rounded album. In past albums, the focus of the band seemed to be entirely on making the song either too heavy or too soft. The Wrong Side of Heaven and the Righteous side of Hell does well with finding a balance between these two extremes, a perfect example of this is the heart twisting song “Watch You Bleed” that starts off with the heartache inducing lyrics “ I'd.... give anything....just to cut you free... I'd... give blood...just to watch you, JUST TO WATCH YOU BLEED!” The song shows the great emotional bipolarity of love as it transitions from the soft melodies which quickly turn to pain wrenching screams all played to the beat of the booming double bass of Jeremy Spencer.

It’s surprising to say that about half of this album is comprised of songs like “Watch You Bleed”. These songs show the diversity and maturity that Five Finger Death Punch has been moving towards since their Way of the Fist days when the focus was entirely on making heavy riffs for the stereotypical meat-head. I love the heavy songs as much as any other Five Finger Death Punch fan but with songs like “The Wrong Side of Heaven” the artistic and lyrical content is really taken to its extremes. “M.I.N.E (End This Way)” was another of their slow, more tuned down songs, but it showed great musical ability as the lyrics were original and unique plus it gave off the positive message of unity in loneliness. Ivan Moody sings “Everybody’s got the same disease, no one’s alone. It could have been much worse but it should’ve been better” an empowering message from someone who is looked up to by thousands. It’s a song anyone can relate to and brings all Five Finger Death Punch fans that much closer.

Sometimes the original elements of the band were forgotten or abandoned in their last record as it had a more “emotional emphasis”, the few songs from American Capitalist that were intended to have the original trademark Death Punch shredding and finger twisting leads were too repetitive and often times ended up coming off as lazy because there was a lack of creativity in the lyrics and the way the music was arranged in general. Songs like “Dot Your Eyes” or “I.M. Sin” never get old, they can always make the audience follow along the way a metal song should. The Wrong Side of Heaven and the Righteous side of Hell could have easily crashed and burned. With two albums within the span of two years I expected the songs to be more generic and spit out, this didn’t happen,
“It could have been much worse but it should’ve been better” even though the album suffered in some small areas it definitely holds up as a whole because there is more good things about the album than there is bad. If volume 2 of The Wrong Side of Heaven and the Righteous side of Hell is anything like the first volume it will definitely be worth buying and will not disappoint any Five Finger Death Punch fans or fans of the hard rock genre. 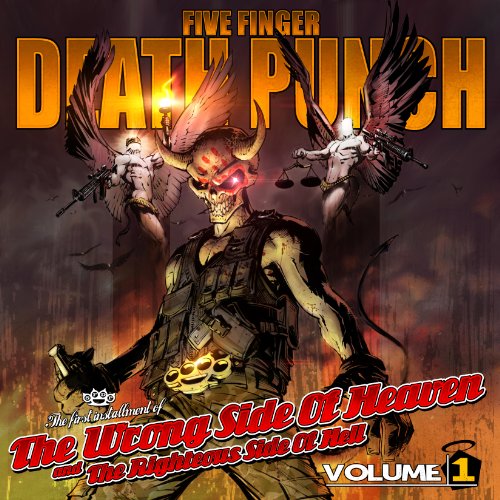 
Buy from Amazon Available on iTunes
The author's comments:
the amazing entity of the album as a whole
Post a comment
Submit your own