“Thank you for coming to my party!” exclaimed singer/songwriter/pianist Regina Spektor.

The audience members would agree that this show was as entertaining as any party. Regina's original songs are sprinkled with theatrics and provided for a set that was both intriguing and amusing.

The stage was empty when Ms. Spektor began her performance and her a capella opener provided an accurate idea of how incredible the rest of the set would be. Regina played solo the first half of the set, which included her older songs.

Her always-witty lyrics include topics ranging from finding a man's wallet and returning it to Blockbuster, to washing dishes, bubbles, and mortality. Regina performed by clapping, stomping, and clicking her tongue, but what got most people was her true musical talent. Regina sang the majority of lyrics rapidly, often repeating words or lines.

As if it weren't enough that Regina has enough talent to sing her trailing, fast-paced vocals while simultaneously beating the keys of her piano throughout her performance, during “Poor Little Rich Boy” she was actually able to keep a powerful drum beat on the chair seat next to her and maintain her wit and adorable persona.

“I'm in no danger of becoming a pro,” Regina claimed, as she picked up her guitar and performed a few songs solo, including “That Time” from her newest album. Her band then joined her for eight more songs. For an encore, Regina and her band returned with “Ghost of Corporate Future” and “Us,” both of which called for crowd participation. She then played “Samson” solo before returning to her band for “Hotel Song.”

After the show, a feeling of awe overwhelmed every member of the audience. People stood around outside unsure of how to react to the unbelievable set they'd just experienced.

There's something different about Regina Spektor. Maybe it's her influences, which range from Mozart and Bach to Radiohead and Nirvana, even Eminem. Perhaps it's the fact that in 2003 she toured with The Strokes (and even performed and recorded with them) that makes her so cool. Maybe it's a combination of all that and more. Whatever the case, we're glad the girl from the Bronx (originally from Moscow) stopped home again.

Spektor self-released two albums (now rarities) before signing to any company, and has since released two more albums (“Soviet Kitsch” in 2005 and “Begin to Hope” in 2006). Her most recent has brought her the most attention. Go check it out for yourself. 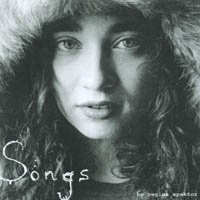 Favorite Quote:
'Miles to go before I sleep'
- Robert Frost