Queen is one of the greatest rock bands ever, and Hollywood Records decided to produce three greatest hits CDs and sell them as one package. The Platinum Collection is packed with the best of the best, the songs that everyone knows and loves. Each with 17 tracks, the first CD contains Queen's most popular songs: "Bohemian Rhapsody," "Another One Bites the Dust," "Killer Queen," "We Will Rock You" and "We are the Champions." Thank goodness Hollywood Records didn't try to extend any song on this disk and very intelligently decided to leave them alone.

The second CD puts fan favorites together, and seemingly in a perfect order, as each song is better than the last, and they all are good. Again, these are untouched recordings (instead of live performances), which is almost always a good thing. Songs include "A Kind of Magic," "I Want It All," "Innuendo," "Breakthru" and "The Show Must Go On." This, however, is where the magic ends.

The final CD is extremely distasteful to me and has only three songs worth listening to: a live performance of "The Show Must Go On" with Elton John, "Under Pressure" with David Bowie and "Somebody to Love" with George Michael. Other songs include the most horrible remake of "Another One Bites the Dust" I have ever heard (it was turned into rap), and "Living on My Own," which doesn't even star Queen. This CD is best used as a coaster. I don't know what Hollywood Records was thinking when they cut out a live performance of "We Will Rock You" to put in a rap song.

Notwithstanding the third CD, "The Platinum Collection" is great. If you have the money, and are in dire need of all things Queen, this collection is all you will ever need. 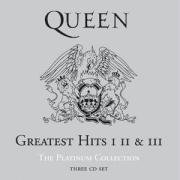