If you're looking for a fresh, easy-going sound, check out Nada Surf. This three-man band makes simple but great music. Unlike most, they don't overwhelm your ears with complicated guitar solos or loud, fast lyrics; their music is at a far greater level than most bands. They have smooth, catchy riffs that are clear and concise, and their vocals are melodic and fluid. The band itself stays low-key and off mainstream airwaves, but they tour frequently and perform at small venues for their loyal fans.

Nada Surf's first album, "High/Low," released in 1996, has 10 great tracks. It creates a cool setting with the low, relaxed songs and then blows you away with the lyrics of the deep, intellectual ones. The most profound song, "Popular," is a satirical piece about the shallowness of popularity.

"Sleep" and "Stalemate" are well-written, fun and creative; "Psychic Caramel" has such an interesting name it makes you want to listen to it just for that reason! Another satirical piece is "Hollywood," and yes, you guessed it, it mocks show business.

The CD ends with a bang; "Zen Brain" addresses the subconscious. It's about how we should throw away the predispositions we have to be happier and it pulls together the theme of the CD.

Most CDs sound exactly the same with boring lyrics, but Nada Surf is an awesome band. "High/Low" is a great album by a great band that you may have never heard of, but is definitely worth picking up. Once you start listening, you won't want to stop. Their light, airy sound, combined with amazing lyrics, makes a great compilation. . 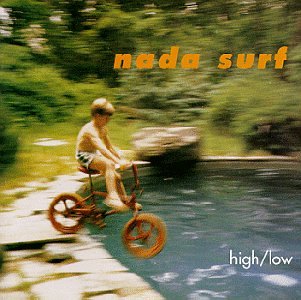 View profile
I love them one of my phones had a song of theirs on it and I had no clue who they were. I listened found the music very enjoyable and quite tranquil unlike most of the music of today. Great band. Great review. keep it up :)