As the name suggests, if you like the pre-manufactured"bands" that control music today, don't buy this CD. If you likeodd-sounding, bass-driven music that can range from twangy to thrash, this albummay be for you.

There are two things that might discourage you from likingPrimus. The first is Claypool's nasal voice; at first I found it annoying but gotused to it after a while. The second problem is that some of the songs are justplain dumb, or about something meaningless. For example, "Ballad ofBodacious" is about a bull in a rodeo.

Rage Against the Machineguitarist Tom Morello co-produced and played on several tracks, which areprobably the best on the album. I think it was a great idea for him to appearbecause this combines one of the most unique bassists with one of the mostversatile guitarists. Producers include Fred Durst of Limp Bizkit, co-creator of"South Park" Matt Stone and Tom Waits.

This is an all-aroundgood album. My favorite songs include the title track, "Electric UncleSam," "Mama Didn't Raise No Fool," "Dirty Drowning Man,""Power Mad" and "Natural Joe." "Eclectic Electric"is mediocre because it is eight minutes long and gets old after a while.

If you are tired of the norm, get "Antipop." 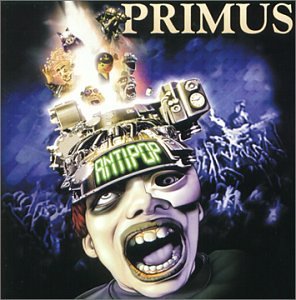