T-pain's album "Thr33 Ringz" is one of the most phenomenal Hip-Hop albums ever made. T-pain teamed up with huge stars such as Ludacris, Lil Wayne, T.I., Kanye West, Diddy, and DJ Khaled to make a wonderful album. His song with Lil Wayne "Can't Believe It" was a big hit along with his song "Chopped 'n' Screwed" with Ludacris.
You probably remember T-Pain from his hits singles "I'm Sprung", "I'm in Luv (With a Stripper)" or "Buy U a Drank". He then sung chourses in songs by Kanye West, Xzibit, DJ Khaled and many morewhile making his first album "Epiphany". It debuted at #1 on the Billboard 200. Not long after it's release, he began work on his newest album "Thr33 Ringz" while still singing songs with more big-name rappers and winning awards like Video of the Year for "Good Life" and Best Collab. for I'm So Hood. Now he's back better than ever. In his songs "Can't Believe It", Lil Wayne adds a great verse with his "pitchy" vocals. In "Chopped 'n' Screwed" feat. Ludacris, T-Pain's voice compliments Ludacris's verse, because he has a flow better than anyone in the game.
If you like really heavy Hip-Hop, this album isn't for you, but if you like that "soulish" music, this is the best album out there. 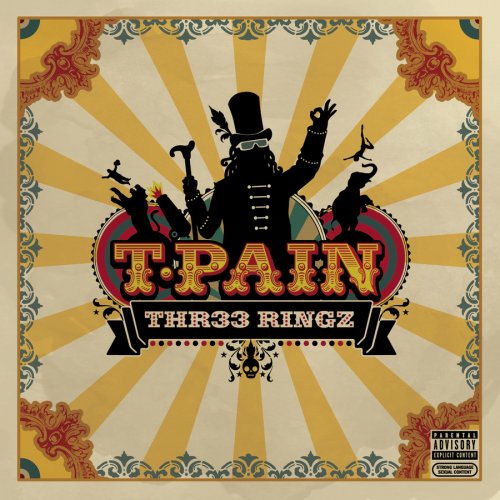