Now the story of a wealthy family who lost everything, and the one son who had no choice but to keep them all together. It’s Arrested Development.

Arrested Development ran for a meager three seasons, starting in 2003. It was brilliant but under-advertized, and thus faced the ax. But the few who watched it then or have since discovered it through the beauty of binge-watching can’t say enough about it, including me. So here’s my (kind of) ode to the show.

First, an overview of the Bluth family: George Sr. (Jeffrey Tambor) is the patriarch of the family, until he is arrested for embezzlement and other white-collar crimes after using money from the family business accounts. Whether in prison, on the run, or hiding in an attic, George Sr. always finds a way to make life miserable for his family. Well, at least for Michael (Jason Bateman), his middle son, who is the only one in the family who really makes an effort to help it. Michael is the family’s rock; without him, they would have surely met their downfall in debt and scandal. Even with his help, they are always on the brink of destruction due to their numerous flaws and quirks. The family is quite a handful. First, there’s Lucille (Jessica Walter), Michael’s mother. A constant drinker, Lucille can’t accept the fact that her lavish lifestyle must be put on hold while her husband and president of the Bluth Company is on trial. She’s snobbish and cruel, even to her own children. Gob, pronounced “JOBE” is the oldest of those. Played by Will Arnett, Gob is easily the funniest character on the show. He’s a struggling magician and a desperate ladies’ man who is always seeking some sort of approval from his negligent father and fighting with his younger brother, Michael. Then there’s Lindsay (Portia de Rossi), Michael’s twin sister. Lindsay and Michael couldn’t be more different, however. Whereas Michael is responsible, practical, and down-to-earth, Lindsay is lazy, shallow, and careless. She throws fundraiser dinners for numerous charities, which usually promote opposing ideals, just because she likes having parties and showing off her money. Her husband, Tobias (David Cross) is an ex-psychiatrist-turned-actor who may or may not be gay. Their marriage is one of the strangest and funniest relationships on the show just because it’s so unlikely that these two people would even go on a date with each other, let alone get married. Tobias is constantly trying to jumpstart his nonexistent acting career, all the while spewing comments that are just begging to be taken the wrong way. For example, “I just blue myself”, in reference to his blue body paint when auditioning for the Blue Man Group. Despite their lack of chemistry, Tobias and Lindsay have a daughter, Maeby (Alia Shawkat). Because of her parents’ total lack of responsibility and consistent failure to notice her, Maeby resorts to making trouble in a desperate attempt to elicit some sort of reaction from them. Meanwhile Michael’s son, George-Michael (Michael Cera), her cousin, is drawn to this, being somewhat of a timid dork. He develops a strange crush on his cousin, making for many awkward (for him) and hilarious (for us) scenes. And finally, there’s Buster (Tony Hale), the youngest Bluth brother, who is an over-dependent man-child due to his mother’s constant… well, mothering. Buster still lives with Lucille, and has a strangely oedipal love for her. He gets overly defensive of her whenever either of his brothers or his sister complains about her, and does everything with her. It’s quite strange.

So this is the Bluth family. Together, all their bizarre quirks and flaws make for excellent, ironic, satirical television. They may be the most dysfunctional family ever, but every episode proves that they are, incredibly, still a family, despite the fighting, yelling, manipulating, name-calling, and other offenses. As Michael says, “Family first. Then breakfast.” It was a great tragedy to its loyal, if small, fan base when the show was canceled in 2006. Until now. Seven years later, the show was resurrected for a Netflix-only fourth season, with plans in the works for more...

The fourth season starts off great. Hey, the Bluths are back! George-Michael is in college, and Michael’s living with him! Hahahaha! But it quickly becomes apparent that the show has changed. Each of the fifteen episodes focuses solely on only one character. It’s “Michael’s Arrested Development” or “George Sr.’s Arrested Development”. While there are occasional visits throughout the episodes from other Bluths, the family is separated. And that meant for less entertaining TV. Not all of the characters are meant to be leading ones. The worst episodes are, in my opinion, Lindsay’s and Tobias’s. Those two characters work best when played off other family members, and unfortunately, there isn’t a whole lot of that here. Lindsay’s two episodes focus on her having affairs and being annoying, while Tobias’s center on him and his new annoying druggie-actor-girlfriend making a musical while in a rehab clinic. Although normally I love Tobias, he just isn’t as funny without other Bluths. There are some funny episodes, of course, most notably Gob’s, Lucille’s, and Buster’s (I don’t know why they decided to give Lindsay and Tobias two episodes each instead of Lucille and Buster. They would have been a lot funnier). Michael’s episodes aren’t too bad, but I think the writers changed him too much. When the show starts, he has actually abandoned his family, following through on an oft issued but never fulfilled threat. This isn’t the old Michael we all love. He always helped his family, whether out of love, responsibility, a misguided sense of loyalty, or even just to feel good about himself. But whatever his motivation, he always helped. Without him in their lives this season, they fall apart. This might have been a good plotline to explore for a couple of episodes, but it seems too drawn out over this season’s fifteen.

I’ve seen some interviews with the show’s writers about why they took this character-an-episode approach, and they claim it’s a prelude to an upcoming movie or another new season. They say the family’s chaotic life apart in this season will only serve to teach them a lesson later on, when they realize how much they need each other after all. And I can understand that. But did it really have to be fifteen episodes long? That idea could have been explored in three or four of the fifteen, and thus given loyal fans a more rewarding resurrection season. Fifteen was too much. Here’s to hoping that the next installment in the Bluth family’s life will bring them back together, and bring back the spirit of the old show we all fell in love with. 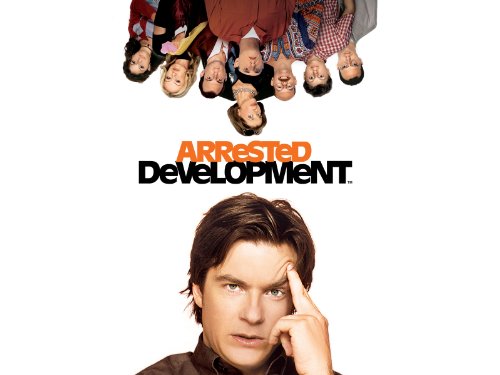 
Buy from Amazon Available on iTunes
The author's comments:
The bananas because the Bluths also own a frozen banana stand by the beach. "There's always money in the banana stand!"
Post a comment
Submit your own