Behind me, I
keep nine fish in a glass box.
Two are flat and pink, like toes with
surprised eyes, and
mouths that hang open (just a little),
Three are yellow and black
barred, like underwater bees:
two are males; when the only female is fat with eggs,
they chase her around and around until she
hangs motionless in the corner,
exhausted and disheveled, and
when the seed-pearl eggs drop from her belly, she
turns and crushes them in her mouth.
Two are long and reptilian,
with flattened fins and
grey stained flanks,
One is short and quick and speckled, and
One (the largest) is black marbled and round, like
a glittering coin, bristling with vertical, fast fluttering fins:
he (she?) is the only named one, and
he is the reason there are only two pink fish,
when there used to be three.
(He ate the eyes first, then the fins, then tore into
the soft belly for the intestines)
What I really mean to say is,
the whole cube is like a slice out of a river somewhere,
with predators and sex fiends and round, glittering eyes like jewels, and
sometimes, when
I’m just thinking, I’ll put a sudden box around myself, and think
if this was cold glass, and
I lived only to be observed,
what would I have
to say for myself?
Would I be the recluse or the murderer?
When I press my hands and forehead against the walls,
do I smile or shut my eyes? 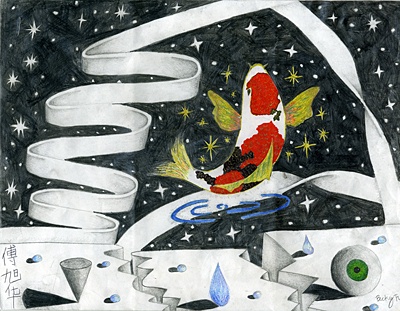