Cygnus Starr was the most handsome man in the entire world. He had a long, thin, graceful neck, a bright, flashing smile, and the face of an angel. But he had a sour disposition, and the only time he smiled was when he was handling the money he collected from the poor.

Cygnus had caught the eye of every girl in the village--except one. Her name was Sky, and only she could see past his rosy cheeks and to his black heart. Of course, Cygnus noticed that she paid no attention to him, and was therefore very interested in her. She was not the prettiest girl in the town--button nose, brown eyes, and long plaited brown hair--but she was good looking and Cygnus was determined to have her as his bride.

Every year, the King and Queen held a royal ball with a theme. It was always the talk of the town, and as in all good parties, there was a prize for the best costume, and the winner would get to choose anyone from the kingdom to marry-and they were not allowed to refuse.

Cygnus was set that he was going to win the costume contest-and in turn win Sky’s hand in marriage. Cygnus paid a visit to the sorceress in town-
-who just happened to be Sky’s mother. When he arrived at the thatched cottage, he saw Sky sitting on a tufted patch of grass, disregarding that it was night, just gazing up at the stars. Cygnus decided that someday she would look at him with the same admiration that she showed for the pinpoints of light in the sky.

Cygnus entered the house, stooping so as not to bump his head on the wooden lintel. Sky’s mother was sitting on an old wooden stool by the fire, where a pot was simmering and spewing large quantities of green and gray smoke. He cleared his throat impatiently, and Sky’s mother rotated slowly on her stool, her eyebrows raising and wrinkling her loose skin.

“I have come with a request,” Cygnus began, and the old woman beckoned for him to sit. He saw the old, sagging armchair that he was being offered, and he declined. “As you should very well know, the theme for this year’s costume ball is animals. I have chosen what I want, and am prepared to win. However, I need someone skilled to do the craftsmanship-you.” He looked at the aged woman for any sign of emotion, but her expression didn’t change, so he went on. “I want-” but he was cut off by her holding up three wizened fingers. “Three what?” he asked, looking at her fingers in disgust. “Minutes, days, weeks?”

“Three requests, no more, no less,” the woman said, in somewhat of a chant. Cygnus’s forehead wrinkled as he tried to narrow his costume down to three wishes. Finally, he lifted his head.

“I know!” he exclaimed, and he ticked off each item on his fingers. “My costume must be a swan, the most graceful, beautiful creature there is. The costume must be the most realistic that there can possibly be. Use some of your magic and whatnot. And third, make me something that Sky will gaze at with the same adoration that she does at the stars.” The woman nodded slowly, and Cygnus turned on his heel and left.


Less than a month later, the night of the ball arrived, brisk and cool. Cygnus approached the castle gate, wearing a cloak over the costume that Sky’s mother had provided. When he put it on, it seemed rather plain, but now that he was nearing the competition, it seemed to quiver with life. The lights of the palace courtyard blazed down on him, and he could see the other costumes in all of their glory. Not one is as good as mine!, he thought to himself with certainty. Then he plunged into the crowd and began milling around, waiting for the judging to begin.

When the bell in the courtyard chimed eleven times, everyone gathered around the balcony. The King and Queen stood regally on the platform, quieting the crowd with glares. “We have been viewing your costumes for the past three hours, and the winner is-” As the king prepared to announce the winner, Cygnus threw back his cloak, and gasps were heard all around him. The plain burlap sack had been transformed into a coat of feathers, and the stick wings seemed to be a part of his being. Then, as the gasps began to die down, Cygnus felt himself being lifted into the air, as if suspended by strings, and he extended the wings on either side of him. He flapped his wings, and was lifted higher and higher until he was above the entire crowd. As he attempted to lean forward to propel himself downward, he froze, no longer able to move. His wings froze in their outstretched position, and he felt himself being cemented to the sky. As his last breath left his now frozen lungs, his eyes twinkled, and in turn his whole body twinkled.

The old woman never went back on her promise. He was indeed a swan, and he, by far, had the best costume of all. And now, he, too, would be gazed at in adoration by Sky, for he had become none other than a constellation. 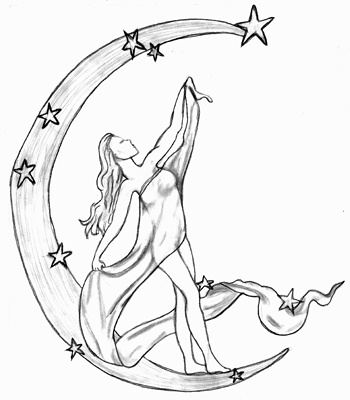 The author's comments:
I wrote this piece for a school assignment, and I had a lot of fun with it. We were told to write a new myth for a constellation of our choice.
Post a comment
Submit your own