A 12-year-old John was playing with his dog, Max, out in the backyard when his mother called him in for dinner. He went inside but his dad said Max had to stay outside for a couple of days.

John wondered why, but he went with it anyway. When John finished his meatloaf he asked why she had to stay outside. His mother refused to tell until after dinner. To John, the ten minutes felt like an hour.

When his parents had finally finished they told him to come into the living room. He could hear Max’s barksoutside. Then he realized that they were too small to be Max’s. So he followed the sound of the barking to the couch. He saw why Max had to stay outside.

It was a new puppy! John wasso excited he startled the chocolate brown puppy. John couldn’t think of a name for the puppy so he named it Chocolate for his chocolate brown fur.

John played with Chocolate passed his bedtime. His parents reminded him that he still had to wake upearly. He didn’t remember why so he just nodded.

At 10:30 he went to bed. John dreamt about Chocolate all night. He was mad though when his alarm went off and he saw the lights flash “Walk Max”. He had forgotten all about Max.

John went out to the backyard and didn’t see Max. He looked all around for her and still didn’t find her. He heard a scuffling noise in the bushes and found Max trying to get a squirrel.

He walked Max and then went to school. School went by really slow. He couldn’t wait to get home and play with his two dogs. He really hoped they would get along.

When he got home he couldn’t see Max in the yard. He checked the bushes but didn’t find her there. He looked everywhere but didn't see her.

He went inside to ask his mom if she had brought her inside. But she said she hadn’t and that he should ask his dad. John went to his dad but it was the same answer. He had no idea where Max was.

It was Monday May 3rd, theday after they had lost Max. They sent out fliers reporting a lost dog. His neighbors said they would’ve seen Max run away for they were playing basketball outside. But they said they did see a truck parked in front of John’s house. John’s parents did drive a new truck. His mom drove a Porsche and his dad drove a Lamborghini.

They became suspicious and contacted the police reporting a stolen dog. The police came and asked if they had caught the license plate number. They did.

The next morning they found the truck with the same license plate number in the dump. From this they had concluded that they were dealing with a smart cookie.

The detectives found footprints leading to the fence and back to the place where the truck was parked. The police dogs could only point which direction the truck went.

“With someone this smart they would be headed out of state,” said the chief. So they called the police bythe northern border of Kansas to block anyone getting out without an inspectionfirst.

They waited for a few daysand got a call but it wasn’t about Max.

Thomas wiped his dirty black hair out of his eyes while he was driving. In the back, Max was barking out ofcontrol.

He was driving back to his house. When he finally got there, it was hard to get Max into his apartment without drawing to much attention. When Thomas got Max inside with a lot of suspicious looks, he remembered he forgot to get some black dye and a muzzle atthe store.

“Stay here and be quiet!”Thomas told Max. He knew that she wouldn’t be quiet though.

He went to the store got what he needed. When he got back his house was a total mess. His sofa was chewed up, the fridge was open and food all on the floor.

“MY GOD! I LEAVE YOU HERE FOR TEN MINUTES AND YOU COMPLETELY DESTORY MY APPARTMENT!” exclaimed Thomas.

He ran to the bathroom and put the muzzle on her first. Then he put Max in the bathtub and dyed her fur black instead of her usual golden blonde color.

He began to wonder why he stole this dog. Then he remembered for the money in the dog show.

One million dollars doesn’t sound like much anymore. How am I going to teach this dog tricks, thought Thomas. He was going to have to do a lot of work. The prize money was one million dollars. So this will be worth it.

His son should be coming home soon and would see the dog. I should say I bought it for him as an early birthday present, he thought.

He waited and waited for his son to come home from school. After what seemed like a century. His son came home.

“Dad did you know there is a dog in the apartment,” his son said in a terrified tone.

“Yes,” Thomas said calmly. “He is yours Arnold.”

Arnold didn’t know what to say just stared at it shocked. “What should I name her?” asked Arnold as he was pacing the room.

“Come on Jimmy, let’s go to the park!” said Arnold excitedly. Max came out of the room and Thomas put him on a leash. They got in the car and Max started to bark but didn’t, knowing what she would be given if she did.

It was now Tuesday May 10th. And there is still no sign of Max. The only place that they had not set up flyers at is the park. They drove to the park and John’s parents put up flyers while John sat by the fountain. There wasn’t any people around, but they still set up flyers.

“I wish Max would come home,” thought John as he threw a quarter in the fountain. All of a sudden a black dog came running through the fountain and started licking John.

“Jimmy,” said a voice thatJohn had not recognized. A boy had come over to him and tried to pull the dogthat was licking John, but it wouldn’t budge.

“Excuse me, sir,” said John to the boy’s father. “Where did you find that dog?”

“Um… I bought it for my son,” said Thomas quickly.

“Oh, I could’ve sworn that it was the dog that I had lost,” replied John. “ Have you seen it?”

But when Max had been running through the fountain some of the dye had washed off and some of Max’s real fur had shown and John saw it. “Hey! Your dog is changing colors.”

Thomas tried to pick up Max,but she was too heavy so he ditched her and ran. John’s mom had come over and called the police. His dad tackled Thomas and was trying to keep him on the ground.

Thomas kicked John’s dad in the head but he wouldn’t let go. He kicked again and missed. John’s dad punched Thomas in the gut and Thomas had the wind knocked out of him. Thomas grabbed John’s dad’s wrist, twisted and there was a sickening crack. John’s dad let go and Thomas started to sprint again, but the police had gotten here and two had grabbed him by the arms.

“What are you doing with my dad?” said a screaming Arnold as he was kicking one of the police in the shin. It had no effect.

“Your daddy has done something bad and is going to be put into time out for awhile,” The officer told Arnold. “You will be living with your mommy.”

An ambulance came and put a cast on John’s dad’s hand so it could heal. Police identified that it was Max and Thomas was put into jail for life (they had found out he was the murderer of his own parents). Max went home with John and his family and Max became friends with Chocolate. 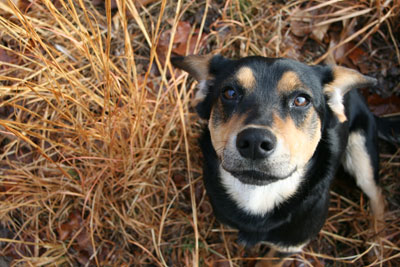