The day which had begun bright and hopeful was quickly turningsour. The darkness of thunderheads rapidly en-gulfed thecalmness of the peaceful land below. The mass of clouds waslike an evil, poisonous ink that diluted the angelic blue sky.As the evil grew and spread, darkness choked its hands aroundthe flora of an open meadow. The summer birds were overwhelmedby the distant rumble of thunder.

It was in thismeadow that Carnus and Funnguae had come to spend their daywith a picnic basket full of food and drink. They dinedtogether day after day in this spot. They loved to watch thesunset on the distant hills, or just run and dance under thesun. Their games were childish, but the stars told them thatthey would someday be united.

Carnus and Funnguaeplayed for hours. After some time they sat together on a rockin the center of the meadow. As Carnus bent to kiss her, thesky before them opened and shot out a bright stem of light.The blinding flash gave them a start. The almost instantaneousthunder exploded with atomic force in their ears and sentFunnguae to the ground. They looked around to see too latethat all the animals had disappeared and all the birds haddeserted their song. The sky darkened. A ferocious wind wastearing through the countryside, bending the trees thatsurrounded the meadow. They looked up to a sea of dark,electrical clouds. Lightning struck the hillside across thevalley. Thunder rattled the atmosphere. The deadlock in thesky had turned into a perilous battle. The storm hadap-proached silently and was now preparing to strike at itsvictims.

Carnus jumped off the rock and took Funnguaein his massive arms. He decided on a direction and ran forcover in the forest. Funnguae looked over Carnus's shoulder tosee their rock split into pieces as a rod of pure energyignited it. The boom almost pushed Carnus off his feet. Theadrenaline flowed inside his great body as he sped along,Funnguae weightless in his arms.

More lightning struckthe ground close behind them. They had almost reached thetrees. As his legs moved with his last burst of energy,another blast came from the front. Blinded from the flash,Carnus was sent to his knees. Funnguae fell to the ground asCarnus made a desperate attempt to get to his feet. Failing,they looked up to see the sky make its finalattack.

That one second before the strike seemed tolast forever. Carnus saw the horror in the eyes of his belovedFunnguae. A new strength arose in him. He jumped to his feetas a boiling beam pierced the air. With a scream thatsurpassed the loudest thunder, Carnus sent the bolt sailingback to its source. His power glowed green as he pointed hishands upward. His aura was concentrated at his hands and wassending electricity into the clouds. Blue lightning shot fromhis fingertips. The storm retaliated. Radiant colors danced onFunnguae's face. The sky was at war.

Fatigue startedto overcome Carnus as he was drained by the battle. Funnguaerose and joined hands with Carnus. Together, they blasted atthe sky with bright fire. Combined, they were was so powerfulthat the clouds broke. Sun poured into the land with suchforce it echoed off the great mountains. The bright blue skycast its luster down on the meadow. The day was young andbeautiful.

The meadow still remains and will foreverremain safe from storm. It is protected by the most powerfulbond ever to be found in the universe: the bond between theparents of time, Carnus and Funnguae. 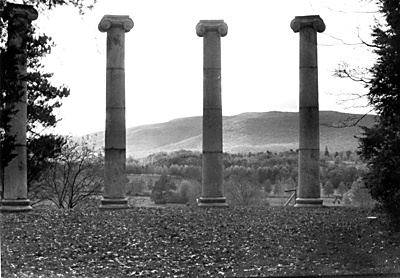