The room was small and tidy, the ceiling fan on, the lamps off-the light from the large window was enough. On the kitchen counter, three glasses, one small, and the others much larger, milk, soda water, and whisky. Ice cubes in the two tall glasses. Mary Fletcher was waiting for her husband to come home from work. Her belly jutted out before her, and her skin was almost transparent-but in a pleasant way. Her eyes were dark, soft looking on the surface, but if you looked close, they were hard and tight deeper down. She bent her head over her sewing, her hair falling across her face as if to hide that hardness.

At a noise from the other room, she laid her sewing aside and stood, and went forward to get her daughter.

“Shh, Patricia, shh dear. It’s alright, don’t cry,” she murmured, bouncing the toddler softly as she walked back to the other room, grabbing the small cup on her way to her chair.

Mary cast a look at the clock, and seeing that it read quarter-past five, she sighed. Several minutes later, gravel crunching in the driveway, a car door softly shut, footsteps crossed the lawn, and the chill air from the open door announced his presence.

“Hullo, dear.” She said it quietly so as to not wake Patricia.

“Hullo,” he answered, stealing a kiss as she took his coat. “Sorry I’m late. Got held up at the office.”

“No matter,” she said as she mixed the drinks, remembering Patrick’s punctuality, how she used to do this for him.

They sat side-by-side, chatting quietly as they drank. He lay a hand on her belly, smiling at the soft kick in return. Something in her face dampened the smile somewhat, prompting him suddenly to ask, “Do you love me?”

“Yes,” came the reply, a second too late.

His face fell, but the questions kept coming, like a torrent of rain after the clouds have opened. He finished with, “Can you ever feel about me the way you felt about him?”

It was as if his mention had raised his ghost, like it was hanging in the air between them. Mary lifted her head, raising those too-hard eyes to his, and said “I hope not,” barely audible in the quiet room.

I stared out the window, at the city that was flying by me, wishing it was more gloomy, to match my mood. I rested my head on the window, letting my breath fog up the window to hide the view. I sighed as the cabby tuned to me.

“Yes. Here.” I handed him his money, leaving him almost no tip. He growled at me, speeding off as soon as I was out.

I glanced at the for-sale sign, sort of liking the bright, red ‘sold’ that stretched from one end of the sign to the other. The house was similar to the others beside it, small, square, and colorful. The yard was neat and clean, with the grass only slightly overgrown. I knocked on the door-my door-and tensed as it opened.

Mary Williams, now a widow, stepped out of the door, clutching her child-Patrick’s child-to her breast with one hand, and carrying two bags in the other. “Would you mind getting that? I can’t carry Patricia and these.” She smiled once, gently.

“Oh, of course.” I stepped forward to grab the bag, slightly embarrassed to catch her with her forehead against the child’s. She was cooing to Patricia softly.

Patricia. Why Patricia, not Rose, or Julia? Why? It just reminds me of him.

We walked the bags to Mary’s car, seating the tired Patricia in her carseat, where she promptly fell asleep.

“Do you think you can find your way around the house? I left you a leg of lamb in the freezer so that you will have something to eat tonight, with it being a new house and all, I figured you’d appreciate it...” She was babbling, and I only had to nod occasionally to keep her talking. I was thinking about Patrick. Again. I did that a lot.

I could kill her for being able to spend that time with him. For being able to bear his child, live in his house, be his wife. I wonder if he even told her about me before he died. No-not died, but was murdered.

I will save that crime for the day I meet his murderer. I couldn’t shake the feeling that if I met him, I’d know he was the one that killed my Patrick. And I would kill him on the spot. Without hesitation. He left me nothing of Patrick but his house and his ghost. For that, I could never forgive him.

So Linda Miller and Mary Maloney stood and chatted, but neither of their hearts were in it, for Mary had a heart only for Patricia for the rest had died with her husband, and Linda’s heart was forever with Patrick. 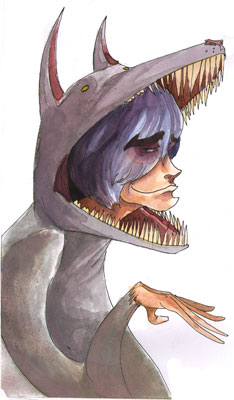 The author's comments:
This is an epilogue to "Lamb to the Slaughter," by Roald Dahl. Please read the other story before this one.
Post a comment
Submit your own