There and Back Again: A Dragon's Tale | Teen Ink

There and Back Again: A Dragon's Tale

Why did those dwarves and their annoying burglar come back to steal my treasure? I mean, I took it from them fair and square. Even if I am a giant armored fire-breathing dragon. There were lots of them! That’s a fair fight, right? Anyway, it’s not my fault I’m a dragon and love gold and treasure. And it’s definitely not my fault that my annoying little brother took my first treasure. I never gave him any reason to hate me! I mean, yeah, sometimes I’d torch him with fire when I was mad at him, but we’re dragons! That’s what we do. I always gave him the bones from whatever creature or person I ate… Alright, I only gave him the bones because they’re gross and crunchy and hurt my mouth. But still! He should have been grateful. I was a good older brother.

Eventually I got my own treasure hoard, away from the family. I stole it from some king after he died. What was his name? Isildur, or something like that? Anyway, my parents were so proud and relieved when I moved out. They came to visit often with my brother, and together we’d marvel at all my sparkling rubies, glittering gold and iridescent pearls… Where was I? Oh yeah. One day, I was happily taking a nap under a warm and cozy mountain of gems and gold when my brother came to visit. He woke me rather abruptly. With his teeth. In my neck. The little traitor! I’d trusted him, but the jealous creep couldn’t bear to see all my dazzling treasure when he had none. His fangs dug deeper and I roared. I tried twisting around to get a clear shot of him with my fire, but to no avail. I couldn’t fight him because I knew he could bite down harder, and that would be the end of me. He dragged me out of my cozy cave, with his teeth still in my throat, and threw me out with a triumphant roar. Still dazed from my nap, I turned around and tried to sink my teeth into him in return. But he was too fast. I couldn’t make contact with him; he ducked and avoided every blow. He’d taken my treasure like a coward and now he was fighting like one. Already wounded, I couldn’t gain any ground. He gained plenty though. He drove me down the slope in front of my cave. With one last powerful swipe of his claws, he ripped a patch of scales and skin off my chest when I reared to unleash a torrent of flames. I roared in pain and shot one last burst of fire at him, but we both knew I was beaten. He bellowed in triumph and retreated to my cave, leaving me to fly away in defeat. If it’s possible to limp while flying, I did. I was hurt physically and mentally by his betrayal.

For a while, I lived a quiet life in the Misty Mountains, licking my wounds and stoking my fiery anger. The scales on my chest never grew back, leaving me forever vulnerable. But, the food was terrible there (there were only goblins and a scrawny little frog-person that I almost caught twice) so I left to find someplace better, hopefully with lots of sparkly gems. I headed towards the Lonely Mountain in the distance. I’d heard of a dwarf kingdom there that had grow lazy and rich. I needed more treasure, and dwarves have the best. It was perfect. On the way to the mountain, I passed a town that was built in the middle of a lake. Odd. They called it “Laketown” I think. Humans are so creative. When I finally reached the mountain, beautiful chaos ensued. In a gloriously short battle, which mostly consisted of me incinerating and eating dwarves while their arrows and swords bounced harmlessly off my handsome scales, I took the mountain and all of its wonderful treasure. The remaining dwarves fled, which was fine by me. I was full anyway. I settled down in a nest of gold and enjoyed my victory. The last few decades have been so wonderfully relaxing. I learned that my brother is dead, killed by elf warriors who wanted his gold. Serves him right.

But then the dwarves returned. They sent in their annoying invisible burglar to try to kill me or steal the treasure. I don’t know which, but he wasn’t very successful at either so it doesn’t matter. Not even my brother could kill me, so I wasn’t afraid of them. They were just really annoying. So last night I flew around the mountain, smashing things up and burning the smashed things. It was the most fun I’ve had in years. Anyway, there’s no way that the dwarves and their burglar survived. Now I’m off to Laketown. Before the burglar was incinerated and crushed, he foolishly revealed to me that he and the dwarves received help from the Laketownspeople. How dare they try to take my gold from me! I haven’t pillaged them in years. But no matter. They’ll learn their lesson. And now that I think of it, I’m rather hungry after all the fun I had last night… Soon I’ll be back to take a long nap, in peace once more. 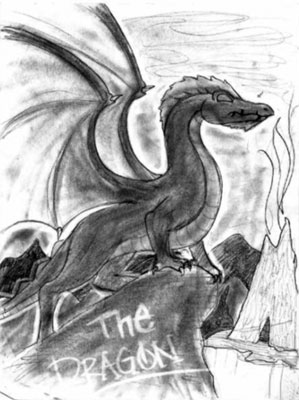 The author's comments:
This was something I wrote in my Creative Writing class. The assignment was to rewrite a famous story from the point of view of the villain. So I chose Smaug, the dragon from The Hobbit.
Post a comment
Submit your own

Favorite Quote:
Those who hate others for being different are disgusting....they don't deserve to be called human!