Layla stepped out of the doorway after saying a quick goodbye to her mother, who was working in the kitchen. A gentle spring breeze tousled her long red hair, making it playfully hop across her face. She walked quickly with a strong sense of composure that guaranteed her stares from onlookers. As she rounded the corner of the small clock tower, she picked up speed.

"Whoa there, Ms. Layla. It might do you good to watch what's in front of you," commented the tall gentlemen in front of her. After regaining her balance, she recognized him as a dear friend of her father.

"Good afternoon, Mr. Lane. I was just heading to the prison to see if my father had gotten his payment," she explained, hoping it would justify her cantering into him.

"Ah, I was just there. He brought in a good haul this time, I think it should please the birthday girl," he teased, giving a chuckle at her expense.

"I really have to go. The fabric store closes soon. I was hoping to get some gingham for a new dress. I'll see you soon, I'm sure," Layla said as she began to walk away. She picked up speed again, but this time made sure to watch where she was going.

As she neared the prison, Layla's excitement grew. She hadn't seen her father in at least a week. He was always out capturing slaves for extra money. At this time, being a bounty hunter paid very well and paid for many of her family’s luxuries. Both she and her mother were beauties and dressed like it too. Every slave her father brought in meant something pretty for her. This time, on her birthday, it was sure to be something truly spectacular.

Finally, Layla was standing in front of the prison. Despite the gloomy look of the cold brick building, it was her treasure chest. She smoothed down the front of her bright blue dress, and pushed open the door into a dimly lit room. The second she closed the door, the sweltering air and scent of human odor was drawn closer and closer, until it cushioned her body.

The walk down the long corridor of cells to the room where her father received his pay always frightened her. The jeers of prisoners were terrifying, and so was seeing the horrific wounds they had sustained trying to run away to freedom. The farther she walked, the longer the corridor felt. Layla had made it to the tenth cell when she heard the wheezing breaths and someone trying to speak.

"Child, come here. I have something important to say," the voice scratched out.

"You have no business talking to me," Layla responded confidently without looking towards the cell.

"It's my own business who I be talking to, not yours. Come closer, child." Cautiously, Layla stepped away from the center of the corridor, and more towards where the voice was coming from."That's right, sugah, just a little closer so I don't have to strain my voice."

"I'm close enough. Tell me what you have to say." Layla was feeling awed. Never before had a prisoner asked her to come closer or expected her to speak to them. She was waiting for a response, but it didn't come. "Tell me now, or I'm leaving," she said impatiently.

"You look like the man who caught me. Is he your father? I need you to tell him to let me go," said the voice. Layla heard rustling as the person in the cell came closer. Her skin was dark as night, and her dress was in tatters. Her hair was thick, curly, and full of twigs and leaves. Her face was wrinkled and dusty, as if it were a crevice that no one had ever bothered to clean.

"I'm not going to do that. You're a slave. You belong with your master," Layla said.

"Sugah, if any of these white people in these cells asked you what I did, you would have at least thought about it. My skin is dark and I am property because of it," the woman sighed.

"I would never let any of these people go. You're someone’s property, and you have to be returned," Layla asserted.

"Sugah, I could have been born white as a snowflake, but it wouldn't have made a difference after all the time I've worked in the sun. Even you would be just as black as me," the slave responded. "It's not my fault I was born the color I was, but I still pay the price for it."

"I'm not going to tell my father anything about this conversation, if you're lucky. He would beat you right here if he knew anything about this," Layla threatened. She was sure that if she stood up to this woman that she would be able to go on her way and enjoy some money for a new dress.

"Listen to me, sugah. I got a daughter-in-law out in those woods ready to have a baby. I need to be released so at least that child is born into freedom. Heck, I'll even come back here if you let me go," the slave pleaded to Layla. Layla new that the slave wouldn't return if she told her father to set the slave free. She also now knew that there was a another slave in the woods, waiting for this one to come to her aid. If she were to tell her father about it, she would be rewarded greatly.

"Fine, I'll tell my father to let you go," Layla moved back into the center of the corridor and began walking the rest of the way. When she finally got to the door, she knocked and waited impatiently for her father to get up and open it. He welcomed her into his room, where she flung herself into his strong arms.

"Welcome home, Pa! I'm so glad you made it for my birthday! I have some interesting information for you. There’s another slave in the woods. She’s pregnant, and probably worth a lot to her master," Layla said excitedly. Her heart sped up a little as he reached into his pocket and took out a small velvet satchel.

"Darling, thank you! Sorry, but I'm going to miss your birthday dinner. Take the money in this bag and spend it on whatever you want, but make sure to get something small for your mother and tell her it's from me. You know her tastes better than I do these days," he said as he gathered his freshly cleaned gun and some hand cuffs.


Even though Layla was disappointed that her father would miss the small birthday gathering held for her every year, she couldn't help but notice the warmth of the little satchel in her palm. He had been away more lately, but what he lacked in presence was made up in the extra money her family received from his job.

"Thank you, Pa! I'm going to have the most gorgeous dress made!" she shouted after him. He didn't reply, though, and Layla was left with some heaviness in her heart. Now she had to walk back down that corridor, without the protection of her father. When she reached the cell she had been at before, she heard gentle weeping from the corner. The little satchel fell from her hand and landed with a clang on the cold stone floor.

Layla brushed off the comments, and continued down the corridor. She felt the warmth of her hand, but the satchel of birthday money had gone completely cold. 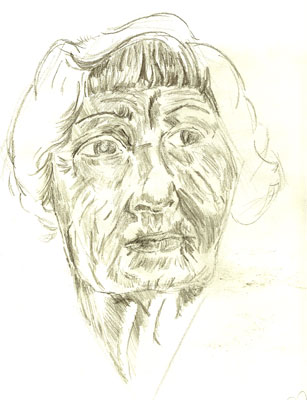 The author's comments:
This was from an assignment to write a short story on a historical topic. It was supposed to be stuffed with good dialogue and elements on lit. (symbols, pathos, etc.).
Post a comment
Submit your own