Favorite Quote:
"If you can quit writing, then quit. If you can't quit, you're a writer."

(You slam the door shut as you fasten your seatbelt and check the mirror. You’ve made yourself as flawless as possible, and you’re ready to go.)

It’s such a stupid question you want to scream. But of course you don’t. April Miller doesn’t scream. April Miller has dyed-orange-red hair, a perfect complexion, and tragically beautiful, yet also mysterious, bandages on her arms. April Miller is stuck in her car after it broke down on the way to the freaking spring formal.

You know you shouldn’t be worried about these things—that’s been your angle the entire school year. You don’t care; you’re cool and aloof. You don’t cry or get upset over who dated who, who cheated on who, who said what, or stupid boring school dances. Anyone can talk to you, and therefore, you can talk to anyone. You are like water. Cool, chill water that can flow anywhere. You were going to meet up with a fellow group of single ladies (water dates, but not often; besides people don’t trust you as much if you have anything, let alone someone), and dance with them. It was going to be fun. You were going to be carefree with the singles then talk cynical about how lame dancing is with the goths. You were actually looking forward to it and now—

“April, I said, are you okay?” That’s Kelly on the other line. Kelly’s a friend. An annoyingly optimistic friend who can’t find it in her to think of anything ever going wrong, but a friend nonetheless.

“I’m fine. But my bandages…” You allow Kelly to fill in the blank as you look down at your red, bare forearms. If you were home you could soothe your unknown skin condition with the one kind of lotion that works (though no one knows why), but you didn’t bring it tonight. You didn’t count on the bandages coming unraveled, or any kind of disaster occurring; you didn’t freaking plan ahead. Ugh, you’re such an idiot.

“Oh no! They came undone?” Kelly actually doesn’t know what’s wrong with your arms—only your family does—but she knows it’s not good. She knows it’s not a gross pus-filled infection— it’s an intriguing thing on your arm that allows you to have a feel of unknown. Of a checkered past. Which apparently, is in. “Try to re-apply them best you can, please, okay? I am coming to get you.”

Suddenly there’s a sharp sting coming from your forearms and—oh. You left your arms out in the sun too long. There’s that burn coming from them, that bearable yet wince-worthy pain. You messily place your bandages over the worst parts, but you know it’s not much use. You also know Kelly’s going to learn the truth about your stupid skin condition. You’re going to have to beg her not to tell people, because skin conditions are weird, and being popular, being admired, is something you don’t want to give up just yet.

You realize you’re still holding the phone, and move to put it in your pocket—which just causes you to loudly shout, “Ow!” to no one in particular and not try that again. Your arm, it feels like eighth grade—the searing pain, the overwhelming feel of being a freak, of having an apparently unchangeable handicap. It’s better now, of course. You actually have a life now. You have friends. You can’t let your arms get in the way of that. You can’t let anything get in the way of that.

You place your jacket on your sensitive skin. It doesn’t really stop the ache, but it’ll have to do for now. And you lean your head back against the car seat and wait. You stare at the mirror, constantly re-doing your make up. You play games on your phone, dull monotonous games just to keep yourself entertained. You stare out the window at the road. You re-start your car. You bang on the car door, even though it locked you in for whatever dumb car reason. You find a first aid kit and put band-aids all over your arms. You nap, and you lick at the emerging cuts between the band-aids. You wait and wait and wait.

You’re on a lesser-used stretch of road. You’ve texted Kelly your location but when an hour passes, and you know the dance is over, you also know Kelly has probably forgotten about you. She probably got too caught up in all the partying and fun. She probably assumed you’d make it on your own, because never at school have you ever given the appearance of being anything other than completely independent. Can’t blame her, can you?

So, with your one of your last ounces of strength, you slide open the squeaky sunroof. You bite your tongue at the pain as you hoist yourself up though it, messing up your dress and mascara. Then you sit on the top of your car for a while. It’s evening now. No harsh sun, just cool breezes. The stars are all set to show themselves in the night sky, and you might as well watch. 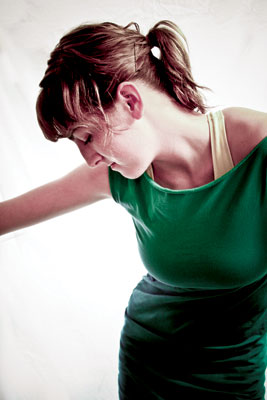