A Long Car Ride, and A Strawberry Feild | Teen Ink

A Long Car Ride, and A Strawberry Feild

It's Florida, and it's hot. We're in the Explorer, and Shane and I are still small enough to fit in the back seat comfortable with blankets, pillows, stuffed animals and back packs. But we've been in the car for an incredible four hours. Four hours of sitting in a hot, hot car, with nothing to do.

Ok, that's not true, we had our books, we had pens and markers and games. But we're bored. I rest my head against the window, staring out at the orange feilds we're driving past.

Dad turns around. "What sort of story, Sugar bear?"

Shane, who's been diligently not reading his summer reading, decides he wants in on the action, too. "Yeah, Daddy, tell us a story about when you were growing up."

"Which story do you want to hear? An old one, or a new one?"

"An old one. I want you to tell me the story of the strawberry feilds."

"Ah, come on Kirsty! I've told you that story a million times!"

"Yeah! Me, too," Shane cheers. (At this point, Shane is young enough to know that agreeing to his big sister is beneficial.)

"Alright," Dad sighs, mocking us, "I'll tell the story about the farmer."

"Yeah! Thank you Daddy! We love you!"

"You don't need a second. You've told this story a million times."

"I always need a second, the story's different every time!"

"Guys, give your Father a second, he's driving."

We pout, but finally Dad is ready to tell he story.

My mother is inside, baking cookies for church. Charlie tried to sneak one off the counter, but Mom grabbed it back, slapped his hands, and sent all of us boys outside.

Charlie and Norman ran down the street, but Danny, Timmy, and I got Jimmy Meyers, the neighbor boy, and decided we were going to go snake hunting. We could get good money for them at the Serpentarium, and we needed it. The sporting goods store had this big, black bat and I needed it.

So, Danny, Timmy, Jimmy Meyers and I set off into the woods behind our house to look for snakes. Any type of snake would do, but water moccasins and rattlers were some of the best. But the prize snake was the indigo snake.

Indigo snakes were beautiful snakes. Thick, and black and shiny. Beautiful. The first indigo snake I caught, I saw it sneaking down into it's hole, and I ran over there as fast as I could, and I grabbed that snake's tail. By this point though, it was already far enough in the hole that it could grab on tight, so I called Jimmy over.

My mother loved that snake. Indigo snakes are some of the nicest snakes, real kind. You'd like them, Kirsty. They're real nice.

I shake my head, no, I would not like them, I hate snakes.

"Yeah, you would. They've got one at Mosh, haven't they? Carlisle, or something like that? He's just a baby, but he's almost as tall as you are. When we get home, I'll take you there, and maybe they'll let you pet him. Anyways, indigo snakes. Real friendly.

Problem was we put him in a tank with a bunch of banded snakes, right? And he ate two of them! After that, we were like, woah, better put him in another tank.

So anyways, we're out looking for snakes to sell to the Serpentarium, so I could get my black bat.


But it's summer, and even the cold blooded snakes think it's too hot, so we aren't finding any. We keep looking anyways, and now it's getting close to noon, and man, are we getting hungry, and right near the edges of the woods, we can see farmer Macmillan's fields! Full of ripe, red strawberries, just bursting with juice. So we figure, we're hot, we thirsty, and we're no where near home. So we're thinking, we're thinking we're gunna sneak into Farmer Macmillan's fields, and we're gunna filch a few of those strawberries, and we'll be out of there before anyone can notice. So we sneak onto the fields, quiet as a mouse, and we start eating those strawberries.

And man, are they good! We're grabbing them as fast as we can, and shoivng them in our mouthes, one right after the other, and the juice is dripping down our chins, these strawberries are so ripe. And then we hear it.

He's in the field. And he's coming towards us.

SO lickety-split, we go running. But he's getting closer, and there's no where to go...

So each of us, we dive into a hay stack, we're hiding in those haystacks, and then Farmer Macmillan comes over.

He starts plunging his pitch fork into the hay stack.

We're hiding at the bottom of the haystack, but then, his pitchfork scrapes Jimmy's arm, and he yelps.

And just like that, he's gone, and we're out! Free! Running as fast as we can into the woods!

And Farmer Macmillan comes back.

And he's got his salt gun.

Timmy and Danny are much older, and they're way ahead of Jimmy and I. But Jimmy's right there on their tail, and soon, all three disappear into the woods. But I'm younger then them. I'm running as fast as I can, but Farmer Macmillan is right behind me, firing off shots at random.

But man, am I running! I'm working as fast as I can go, working those arms. I'm like, man, I've got to get out of here!

And he gets me.

He hits me right in the behind with his salt gun. Right in the behind, and that salt, it goes right through your clothes. My bottom was stinging! He gets off another round, hits me again, but by now I'm right by the edge of the woods, and I just keep running.

I look behind me, and I can see that he's gone, way behind me, but my behind is hurting! So I just keep on running home, an when I get there, I run right over to the hose, and I start rinsing my backside off.

And then my Momma comes out.

"You been in Farmer Macmillan's strawberries, haven't you?"

I straighten up as quickly as I can.

'Well, I don't feel bad for you at all. Don't you go stealing any more of Farmer Macmillan's strawberries, you hear me? Don't you dare."

"You didn't get in any trouble?"

"You've heard the story, Shane, you know what happened."

"Why didn't you get in trouble?"

"My Momma figured I was in enough trouble already. She didn't see any need to get me in anymore. She knew I wouldn't be going sneaking around Farmer Macmillan's strawberries anymore."

"Shoot, Kirsty, 'course I did! I was just sneakier about it, and I never got caught again, certainly!"

"Oh, and what does that make you, Sugar Bear? Didn't I catch you just last week, up in Mrs. Clemm's loquat tree, stealing her loquats?" 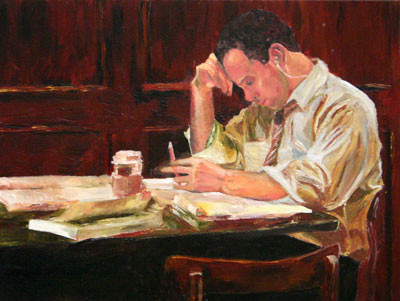 The author's comments:
When I was little, my Daddy used to tell me stories...
Post a comment
Submit your own

View profile
This is so cute!  It's totally true too - good people are bad people who don't get caught and agreeing with your sister is a smart move :)