Never before in the history of Southern Heights had the hallways been so crazy. Or, at least, not since I’d been there. Laughter echoed off the walls, and the students that had already completed their last exams ran down the halls jumping up and down. Summer seemed inches away, and it almost drove me insane to think that I still had my algebra exam to work my way through. Just two more hours, I told myself, and then I’ll be home free. Of course, I probably wouldn’t need all two hours to finish; I wasn’t smart or anything, but I knew the exam would be a joke. After all Southern Heights wasn’t known for its academic standards, and therefore the exams and classes were rather laid back. Southern Heights, home of the Fierce Falcons, was the local high school, and the majority of the kids in my town went there. It was medium sized and co-ed, which meant I knew most of the people there, but some only by name. There was one group of people that everyone knew, and speaking of, they had just turned the corner into the main hallway.

First came Josaline Casino, automatically parting the crowd. Her long, silky brunette hair fell past the middle of her back, and fanned out slightly as she walked. She looked stunning in her designer outfit, and I saw just about every girl in the vicinity instantly check themselves out, even though they thought they couldn’t even compare. I had never seen Josaline in the same outfit twice, and each looked like it was made for her. On second thought, they probably were. She was the richest and most influential student in the school; her parents gave huge donations each year, so the Casinos were always very welcomed.

Right behind Josaline to her left and right were her two signature cronies, Nicole Whiltonburg and Tammy Jones. Nicole’s blonde hair was the most envied in the school- it was also long and silky, like Josaline’s, but Nicole made a point to show off her gorgeous hair all of the time. She wore it in a plethora of different styles; straight, curly, wavy, half up, and some wacky styles that would look horrible on me, but worked amazingly on her. And she never, ever, wore her hair up. I overheard her once saying that it was harder to flash around that way. Nicole actually used to be one of my best friends in grade school, but by fifth grade she had made up her mind to join the ‘in-crowd’, and therefore erasing any association with me. The weird thing was, this year she had been oddly nice to me, which was pretty awkward since we never saw each other (or at least, she didn’t see me), and she spent her six and seventh grade years making sure my life was hell.

Tammy, on the other hand, was much less flashy and showy, but that was because she didn’t have to be. She was tall, with defined features, and known for her vast collection of miniskirts. She was also single, unlike Josaline and Nicole, though I was pretty sure that was because she had simply turned down every offer. How did I know this? Tammy was seldom without three or four boys, all staring at her chest, which was the main reason for her popularity.

These three girls were the most popular in the school, and acted as the head of the tightest clique in Southern Heights; tightest meaning that even though there were a good ten or twenty people following Josaline, Nicole, or Tammy around at any given time, it was next to impossible to get into this little clique, so any wannabe would just be better off not trying. Josaline, Nicole, and Tammy made sure of that. They were juniors, almost seniors, and they and their class seemed to rule the school. This was perfectly normal, because the graduating class could have cared less about the school or anyone in it. My friends and I, however, were lowly freshmen, but this was soon to change. Preparations for the incoming students were already being made, and we itched for the moment when we would graduate from our bottom-feeder status.

As I looked up again, James Cash and Ryan Stills rounded the corner, thus completing the group, and all thoughts of status quickly flew from my mind. James Cash was the school hottie, and half of the school couple. He and Josaline had been going out since the end of their freshmen year, and each new development in their relationship was watched and discussed by the whole student body. James had blond hair, piercing blue eyes, perfect white teeth (which made up his signature smile), and a genuine love for life. Even though he had a girlfriend, many girls hoped for the day he decided that he had had enough of Josaline Casino. But as that was highly unlikely, there seemed to be nothing to do except observe the couple in silent envy.

Ryan Stills was Nicole’s trophy boyfriend. While James was the most sought after and likeable boy in the school, Ryan was the most attractive and well-built. He played quarterback for the Southern Heights Falcons, which meant he was tall, a bit bulky, and very handsome. He had dark hair that stuck out everywhere, but it seemed to suit him. His dark eyes swept over the crowd as he caught up with Nicole, catching her arm and soon escorting her out the door.

Seconds after the ‘in-crowd’ left the building, the bell rung, reminding me that I now had about three minutes to rush off to algebra in the next building. I stuffed my remaining books into my locker and slammed the door. Glancing at my watch every few seconds, I quickly navigated the hallways for the last time this year, trying to ignore those who were already celebrating. I forced myself to think about algebra, and started to panic. What was the quadratic equation? A times the square root of b something to the c? Oh man, I was doomed. 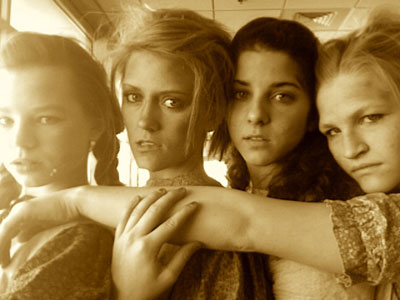 The author's comments:
Once again, a snippet of a larger piece.
Post a comment
Submit your own