“I hate camping,” I told my parents this so many times I hadn’t realized I said it at all. My dad was the camping type, and my mom was half and half. She liked being in the city, but also liked the peaceful quietness of the surrounding forest, no car horns and people bumping into you on the street on the way to work.

“We’re almost there anyway, so your opinion doesn’t matter much anymore.” My brother said, sitting next to me. He got the camping genes from our father. He was ready two weeks before we left this morning.

“Shut up,” I told him, than stared out the window; cities and big houses were long gone. I only had my phone that would keep me from going insane. I was glad I had a car charger to keep it alive for the week we were to be spending outside.

“EWWWW, yuck, so gross!” I screamed. All I was doing was putting my gear and sleeping bag by the tent bags, and I found flies and bees surrounding a big pile of food on the ground, left over by the last campers.

“What?” my mom asked. Looking past me she saw on the ground what I was hiding from behind a nearby tree. Both hands were holding onto the trunk to help me not to fall over and vomit. She continued to unload the car, carrying bins of food and sleeping gear. “It’s okay; it’s not going to hurt you.”

“Yeah but the bees might sting me, and who knows what that would do.” I said under my breath. I’ve never got stung by a bee before, I usually stayed inside on the computer or watching TV. I didn’t have to worry about bugs and creepy crawlies inside the house.

I hesitated coming back from around the tree, and when I tried to move, my hand was stuck on the sap. After I pried my hand off, I ran to the bathroom. There were two double gendered bathrooms, I didn’t care just as long as it had a sink.

I watched as the two tents were being put up, a big one for my parents and me, and a small one for my brother. I didn’t know what to do anyway; camping wasn’t anything near what I wanted to do. Picking the sticky sap off my hands I sat by the fire watching it, making sure it wouldn’t get up and walk away and cause a fire rampage. On second thought maybe that would be a good idea so I could get out of this stupid place they call fun.

An occasional mosquito or fly would come near me, causing me to jump from my seat and walk around before sitting down in a different spot.
By the time everyone was settled, it was time for dinner. I ran to the bathroom, washed my hands like a maniac. Not touching anything going back to our campsite, not even myself. I grabbed my big tub of hand sanitizer, poured a glob of it onto my hand. I rubbed it all on my hands, in between my fingers and under my nails, then finishing up my arms. My family was staring at me like I was insane, and that I was taking this way to seriously.

“What?” I asked? “I’m not touching any food before I eat it. There are so many bugs out here, its gross. It’s so uncomfortable, it’s not funny.”

My brother laughed silently but continued to eat his dish of potato salad and his hamburger. My mom wrapped her arm around me and patted my back between the shoulder blades. I insisted on getting my own food, (no one else washed up either) I grabbed a hamburger but everything on it, using a knife to spread the mayonnaise and ketchup on my bun, then picking up a different knife to cut the burger in half. I threw away the spoon that was already in the potato salad container, and grabbed another to spoon it out for me. Before sitting down again, I grabbed a napkin and a grape soda.

Sleeping wasn’t easy either. It was really dark, and I tried to keep my phone lit, but I had no service and it was using that energy to kill my battery. I turned it off, and tried to close my eyes. At home I had light from my digital clock, most of the time the moon light showed through the window, and every once in awhile, my phone would give light from a text message I was receiving.

Without knowing how I got to sleep, I woke up to the sounds of my parents snoring. It was just light enough outside that I could see the shapes and wrinkles of the tent made by from folding it. But tracing the lines with my eyes I came across a few spots. They were bugs. I noticed they were everywhere, and I curled more closely to myself in my sleeping bag.

After a little bit, the sunny making its way over the horizon, I looked to my phone and reached for it. Pushing my hand past the zipper, I saw my arm was covered in little red dots. Mosquito bites.

I held in my scream. EW, EW, bugs touched me, so gross. I could tell I had a very revolted look on my face. I unzipped my sleeping bag and stood up. My pajama pant legs were rolled up due to sleep. It was cold and I was wearing a T-shirt. I didn’t want to think about the bug bites. I slipped my slippers on and walked very quickly to the restroom.
After closing the door and shifting the lock into the slot, I turned around looking for the mirror, but my eyes stopped over the toilet. The seat was up.

“Don’t people know how to act like human beings?” I whispered to myself disgustedly.

I took a big handful of toilet paper and pulled the eat down, (I realized I also had to go to the bathroom.) When I flushed the toilet, the water was filling up and it spit some of it back at me. Pulling more toilet paper I wiped the water off my hands and forehead. When I went over to the sink, I washed my hands furiously. Then it was time to do what I came to the bathroom for.

The little red dots were everywhere on my arms. I counted five on each, and on my legs there were about 7 on each. My first thought was how the bug got all the way down on my legs, when they were completely covered in the blanket and with my pants on. All I knew is that if they started to itch, I would have my bug cream close to stop it.

“If you keep using that stuff today, you might run out by the third day of vacation.” My brother pointed out a very good point. I just applied a second white cream dot to an annoying red spot on my arm. It’s not my fault that they itch, but I put the lid back on and stuffed it in my sleeping bag.

In a matter of minutes they all seemed to itch really bad, and I knew I had to make the cream last for the rest of the week. I grabbed some ice from the cooler to soothe the itching and it worked for the most part; water kept dripping into my slipper.

The day didn’t get any better, bees and flies kept swarming around me and touching my food. It was annoying that I ended up moving inside the tent with the screen down so I can still see my family.

“You want to come on the walk with us sweetie?” My mom asked, she already had her shoes on and a hat to block from the sun. She was putting things into a backpack like sunscreen and bug spray, and some snacks.

“No, I’ll stay here, I’ll probably take a nap or something.”

“Okay, we’re going to walking far and long, there’s food if you get hungry and drinks. Try to get out in the sunshine for a little bit. It won’t bug you if you sit out in your bikini and lay out on a chair and pretend your on a beach. I’ll see you in bit.” She left, and all I saw last was her backpack going around the corner.

I thought about going to lay in the sun, it seemed like a good idea. I did have some music to listen to, and that would keep my mind away for a little bit. Before I got up I was thinking that this was going to be a long week. Already a lot happened in a couple of hours. But I would have to try to make the best of it, and least so it will go by a little faster and it would make my parents happy. 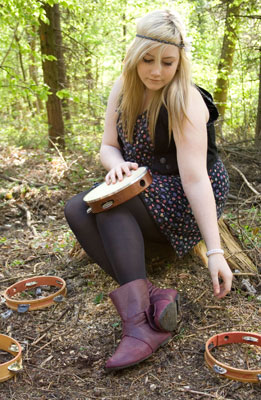 The author's comments:
I wrote this piece because it was something different. A different point of view from what I normally write from. It is supposed to be funny and to entertain the reader.
Post a comment
Submit your own