Favorite Quote:
"Life is not about waiting for the storm to pass, it's about dancing in the rain."

It’s a beautiful day, one of the earlier days of fall. The sky is clear with the exception of a few wispy Cirrus clouds floating by. There’s a breeze, one that plays with the ends of my hair and rustles the orange and red leaves in the branches above my head. My black lab, Delilah, lies on the ground beside the bench that I am sitting on, worn out after our Sunday afternoon run.


I look down at the open book in my lap and am just beginning to read when I hear something clear and sweet and soft. It takes me a moment to realize that it’s a voice. Someone is singing, not belting, just quietly singing a tune that I don’t recognize. I look towards the playground, but see only screaming children, climbing all over the jungle gym like monkeys, swinging, sliding, shrieking while their parents and nannies sit on the benches surrounding the play area and talk amongst themselves.


I look in the opposite direction and see her. It’s a little girl, sitting in the grass not too far away from me and singing to the baby doll bundled in her arms. I wonder how I hadn’t noticed her before, and look around to see if there’s anyone watching her. I figure that her parents must be close-by, but I sit back and watch her anyway, just in case.


When she finishes her song, she kisses the toy on the top of the head and sets it down on the grass, then stands up and brushes herself off. She’s wearing a white long-sleeved shirt with pink spots on it, brown corduroy pants, and white shoes. She has thick brown, curly hair and porcelain skin. From where I sit, she looks a live version of one of those expensive dolls that my grandmother used to collect, the ones she would keep on the higher shelves, just to look at, not to touch.

She walks in a little circles around where her doll sits, looking down at her feet. She slowly places one foot in front of the other, like she’s walking on a tightrope. A flock of birds fly overhead, and she looks up at them for a moment before glancing down at her doll, as though to make sure the baby hasn’t crawled away. Then she starts singing again. This time it’s a song that I’m familiar with: “Somewhere Over the Rainbow”. I smile as I watch her. She twirls and dances around her little circle, so innocent and carefree. I find myself envying her for a second for still possessing that innocence, that carelessness that children have the unknown pleasure of having.

“Somewhere over the rainbow, bluebirds fly. Birds fly over the rainbow, why then, oh why can’t I?” She sings the last few lines in her sweet little voice. She picks up her doll and rocks back and forth, staring lovingly down at its face.

Something causes her to look my way, and she sees me watching her. Instead of quickly looking away shyly like most children would do, she smiles at me and waves. Surprised, I wave back. She slowly wanders over to me, her steps becoming slightly more tentative as she gets closer. When she’s a couple of feet away, I notice that the dots on her shirt aren’t dots after all. They’re tiny little bouquets of pink flowers. I also notice her eyes, which are the most beautiful blue I’ve ever seen.


“Hi,” I reply. She looks down at Delilah, who looks up at her, her tail thumping the ground.


She drops to her knees and starts running her hands over Delilah’s sleek black fur. “What’s her name?” she asks.


“Delilah,” the little girl repeats, scratching her behind her ears, “She’s pretty.”


Delilah licks her hands and face, making her giggle.

“Eliza!” The little girl looks over her shoulder at the woman coming our way.

“This is Delilah, Mommy,” she says, wrapping her arms around Delilah’s neck and giving her a hug before standing up and brushing herself off again.


“She’s beautiful,” the girl’s mother says, then smiles at me as if to say “I’m sorry.” I smile back to say “Don’t worry about it.” She looks back down at the little girl and says, “It’s time to go, sweetheart.”


The girl nods and smiles at me. “Thank you for letting me pet Delilah,” she says.


Eliza slips her hand into her mother’s and the two of them walk away. She turns and waves when they get to the parking lot. I wave back at her, silently thanking her for making a beautiful day so much more beautiful. 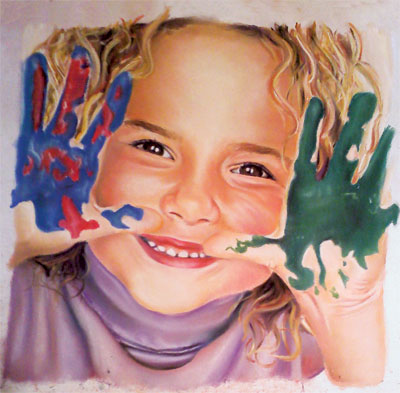