The sunlight filters down through the immense canopy of trees, thick and densely packed in an umbrella of waxy green. Junipers, Elms, Oaks and Birches are all lit on fire together in the radiant heat of the sun. The first signs of autumn are beginning to show, in the few orange leaves blossoming on a sapling oak, in the slight chill in the air, in the smell of warmth and dampness heavy in the air as the leaves on the ground begin to decay in the way that they do during a long Boston winter. The squirrels shriek and chatter as they spring from branch to trunk to branch, their nails peeling the bark with a scratching sound. They are joined in the trees by the birds that seem to unexplainably flock to New England in the fall; the cardinals, the orioles, the blue jays, even one massive red-tailed hawk that swoops majestically in wide arcs overhead, far above the trees.

The sunlight creates a dappled pattern on the forest floor, spots of light and shadow over the crunch of dry brown leaves and soft green grass. The mosquitos are out, of course, over the pond, and a single bullfrog barks out a greeting before flopping gracelessly into the water, creating ripples that mar the smooth surface, rocking the lily pads and distorting the reflection of the little boy and his father, sitting amidst the cattails and reeds on the bank, fishing poles in hand. There are carp in the pond, visible now that the water has been agitated, and they slide just below the surface like slippery silver reflections. The fish chase after the water sliders that skip about on the meniscus of the pool, creating bubbles, and leap into the air, closing their mouths around them with a soft kissing sound before dropping almost silently back into the depths of the pond.

The forest is quiet, as far as forests can be, the silence disturbed only by pleasant sounds; bird calls echoing through the tight spaces between ancient trees, wind as it ruffles the tops of the leaves high overhead, and the bubbling noises made by the inhabitants of the pond. The little blond boy and his father have not caught anything, but then they never really do. That has never been why they came.

The little boy is upset. “Daddy, the fish don’t like me. Don’t they know I’m not going to eat them?” His voice is high, and possesses an earnest quality that makes him seem older than his four or five years. His eyes, green, and currently swimming with unshed tears bravely kept in check, are electric, the first thing people notice and comment on when they see him. He got them from his grandmother. His father has them too, not quite to the same extent, but piercing and shifting just the same. He smiles, creases appearing in the corners of those eyes, and laughs a bit. “Honey, the fish don’t think like we do. And you shouldn’t be upset because we didn’t catch anything. Sometimes you don’t, you know? Happens to the best of us.” When he finishes, still smiling broadly, the boy appears unconvinced, so he sighs, sets down the long metal rod, and begins to tell a story.

“When I was a boy, and I lived in the country, way far out in the middle of absolutely nowhere, my father used to take me fishing too. We would spend many a Sunday afternoon down at the pond, just sitting. And we would never catch anything, ever. I mean, some small things, Sunnies and some Carp, but nothing big, you know?
Well, one day, when I was a little older than you, my father was away on a business trip, so he couldn’t take me fishing. He said we’d go twice the following week to make up for it, but that I shouldn’t go down to that pond alone, because if I caught something big, I wouldn’t be able to handle it. But I wanted to show him that I could do it by myself, that I was old enough. So that afternoon, just after church, - your grandma and grandpa were very religious, - I told my mother I was going to play football with a friend, and snuck out to the pond. Well, I waited at that pond for most of the afternoon, and I didn’t catch anything. And I mean nothing. No Sunnies, no Carps, not even a tadpole. I got so bored, in fact, that I set the pole down and started fooling around with a bit of string I had in my pocket. And as soon as I wasn’t looking, there went my bobber, straight under the water! I didn’t notice, and soon enough, my pole started being dragged right into the pond!” Here the little boy laughed and clapped, realizing where the story was heading. “Well, that got my attention sure enough, and I went running after it like a cat after a mouse! And I should have let go right then, but I didn’t! I didn’t want to have to explain to my mother and father where I was when I lost my fishing pole.
So I got dragged right along with that pole and that fish right into the pond! And then…woo-hoo-hoo, you wanna know what I did then?” The boy nods eager eyed, curls bouncing vigorously atop his head. The man stands up, acting out the scene in a fit of excitement. “Then, I just stood right on up in the water and pulled that damn fish in! And when I finally had him flopping around on the beach, shiny scales flashing in the sun, I could see just how big he really was! He was bigger n’ you are right now, mister!” He pokes the boy in the ribs, sending off another round of giggles.
“And he was mad! His big red mouth was openin’ and closin’ like he was trying to give me a talking to! He was thumping the ground with his tail, and making these funny little gasping noises… like he was drowning. But then I got to looking at him, and I realized what a beautiful creature that fish was. He had these big yellow scales on his back, about the size of my hand, and on his front were tiny little silver ones, like dimes, with a big red stripe right through the middle. And he had these big eyes, so alive, and green, just like mine, and he just looked at me, all full of life and sorrow, and I couldn’t help myself. I dragged that big ol’ sucker right back where he came from, pulled out the hook, and let him go. I couldn’t help it, honest. It was like it was me stuck on that barbed old hook. And you know what? I never saw him again.” Here he ends his tale, and looks at his son. The boy’s big eyes are wide, glowing with awe and excitement. Overhead, the wind hushes them quietly and the big hawk emits one long, lonely note.
“Well,” says the father, standing up amidst the fluff of the cattails, “it’s getting a bit cold out here in the woods, and your mother’s probably wondering what took us so long. She made hot dogs tonight, remember? Your favorite!” He moves to take the pole away from his son, who is still sitting in thoughtful silence.
“Daddy?” asks the boy quietly, “If we ever catch anything, we’ll let ‘im go, right?” The father laughs quietly to himself. “Yes, son, I think we will.” Then, fishing poles in one hand and his son’s small fingers in the other, they walk back through the woods to the road, where their car is parked.
As they leave, the boy looks around in wonder. The air has grown chillier since they arrived, and he can see his breath, a white cloud of vapor before him. The smell of moss and damp has increased, and the squirrels are silent in the trees. Even the pond has grown still as the carp retreat to their home in the soggy wet leaves that line the bottom. The birches crowd tight around the boy, and he thinks about that fish, the one with the big red stripe.
He thinks he would like to see that fish someday. 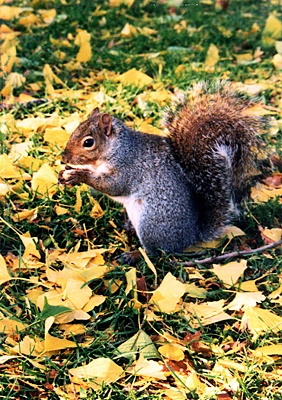