Favorite Quote:
Friends are like wedgies. They know your inner self, they’re intimately close and it feels good to pick out a good one!

For as long as I can remember, I've wanted this one perfect friend. For starters, they would be a girl. She would have long beautiful curly blond hair with bright ocean blue eyes, that remind you of the beach. She would be fun and outgoing, but always stick by me. We would share secrets and talk about everything and nothing. We would be able to sit in a comfortable silence without it ever getting awkward. We would go to each other’s houses, as if it were our own and our parents would treat us as their own. We would have sleepovers and hang out all the time. We would even go on vacations together with each other’s families. We would be inseparable.
As time went on, I never found that friend. Sure, I had friends, but they weren't that perfect one. None of them were blond or had those bright They weren't always fun and would always hang out with other people. I couldn't tell them secrets because they would never keep them and awkward silences were a very common thing.. They would never come to my house and I never went to theirs. We just hung out at school and that was that. Every year, I hoped that perfect friend would come, but she never did. I hoped and prayed that the new girl would be her, but it never was. Slowly, my hopes deteriorated.
Then one day, my parents announced we were moving and my hopes started rising again. Before, I thought she would come to me, not that I would go to her. That first day of school was the only time I was happy to be at school. I thought I had found her, the perfect friend. She was blond and had blue eyes and was funny and outspoken. So, we became friends. At first, it was fun and she was great, but that feeling ended all too soon. I thought she might’ve changed, but the reality was, I tricked myself into thinking she was it. She had blond hair, but it was just blond. She had blue eyes, but there was nothing special about them. She was funny, but not fun. Outspoken, but not outgoing. Her life revolved around being popular and it didn't matter who she trampled on to get there. I didn't want to be a part of that, so I left, but not without being punished. Out came everything I’d ever told her; my hopes, my dreams, my secrets, my past. everything. The idea of a perfect friend started to seem foolish and unrealistic. Could we really have a perfect friend?
I changed schools again and didn't even try to make friends. If I could have a perfect friend, why bother having any? If someone really wanted to get to know me, then they could make the effort, not me. So, they did. They came, the perfect friend actually came, but of course I wasn't expecting it. I was skeptical and questioned it. Could they really be it? Could they really be my perfect friend? Apparently, they were. They were nice, friendly and liked the things I did. We had debates about everything, but we also agreed about everything. We could tell each other everything and none of us would laugh. We gave each other advice and received it gratefully. We would hang out by ourselves or with other people, but we were always together. I really didn't believe my perfect friend was here, for starters, they were a boy. He had black hair, but beautiful deep blue eyes. He was a great listener and a great friend.
I know what you’re thinking., that description doesn't match the one for my perfect friend at all. That’s what I was thinking then too, but I realized that you can’t expect the person of your dreams to come and be exactly how you wanted, you just have to accept what you get and make it perfect by having the time of your life with them. 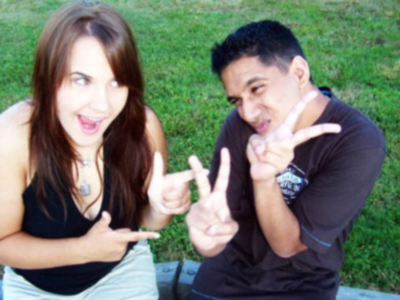