“Come on, guys, let’s go!” the little girl shouted excitedly as she hopped out of the green minivan. She ran to the door and rang the doorbell. A kindly looking elderly lady answered the door. “Trick or treat!” the little girl squealed in delight as she adjusted her fairy dress underneath her puffy pink coat. Her two older brothers ran up behind her. One was tall and thin, with a spiraling rat tail on the back of his head. Glasses were perched on his head precariously, always threatening to fall off and crack in the cool October weather. This boy was dressed as a cowboy. The oldest boy was taller still, but slightly chubbier and larger than the other two children. His costume was less elaborate than the other two, but all three were wonderful homemade costumes. You could tell by looking at their faces that they were siblings. The elderly lady waited for the oldest boy to get to the door, then smiled and said, “If you want some treats, you had better come in.”
The little girl gladly ran into the lady’s house. The two boys followed right after her and chased her into the kitchen. The three children’s mother came up to the door to speak with the old lady. “Thanks, Rosalie. The kids always love it here, and Jeff and I just really need some alone time.” “Not a problem Kelli. See you around eight.” Kelli closed the door and Rosalie turned toward the children. “Now, let’s see about those treats.” She went into her kitchen, a large room with white tile floors and yellow walls. She grabbed a bowl of candy off the counter and put it down to the children’s eye level. “One apiece kids. You know the rule.” Each child greedily snatched a piece of candy from the bowl and devoured it. They started to walk toward the door, not realizing their mother had left. “Wait just a second, kids,” Rosalie said, “Boys, I have another present for you.” She handed them a box decorated with pawns, kings, and queens. It was emblazoned with fancy lettering that said, LEARN TO PLAY CHESS. The boys set to work immediately, ripping off the plastic and beginning to set up the pieces. Rosalie took the little girl to a tall table.   “Alisha, you and I are going to learn how to play Chinese checkers.” “I already know how to play checkers.” Alisha said proudly, throwing out her chest. “Mommy taught me.” “Very good,” said Rosalie, amused. “But this game is a little different…” Rosalie proceeded to teach Alisha how different Chinese checkers was. She was patient when Alisha stood up on her chair triumphantly and announced, “HA! I jumped you! I get your piece.” Rosalie slowly explained again that in Chinese checkers, pieces that are jumped don’t get taken away, or it wouldn’t be possible to win.
Later that evening, there was a knock at the door. “Mommy!” all three kids called out in unison. The entire car ride home, Alisha chatted excitedly about Chinese checkers. “…And Rosalie says you can’t jump pieces in Chinese checkers ‘cuz if you do that then nobody could win.  Don’t worry mommy, I’ll teach you.”  The boys, meanwhile, were happily chatting about their new chess set and when they could show their friends what they had learned. The car slowly coasted to a stop at the old house, white, with a swing set and slide in the backyard. A cool October breeze blew the leaves around in a swirling pattern. Kelli glanced at her rear view mirror, smiled, and got out.  She walked to the back seat and opened the door. All three kids were nestled together, asleep in each other’s laps. “Happy Halloween.” She whispered as she lovingly carrying them into the house one by one. 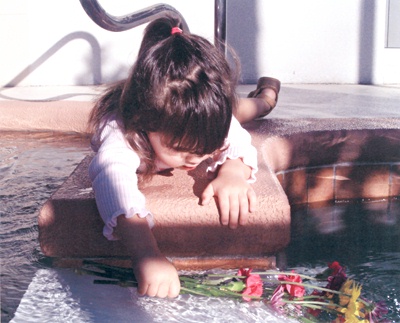