The monitor beeped, finally steady. A doctor talked in hushed tones to an exhausted couple. The pale baby hooked to the machines was theirs, and you could see the pain in their eyes.

“Her heart is weak.” The man in the long white coat emblazoned with ‘Dr. Franklin M.D.’ was grim. The mother, a young strawberry-blonde buried her fine-featured tear-marred face in her husband’s shoulder.

“What does that mean? For her.” He was movie-star material – tall dark and handsome. Or maybe he would have been. If his eyes weren’t weighed down with dark bags and un-shed tears.

“Well, there are really two roads she could head down. The best-case scenario is she will be able to live a fairly normal life, without major health concerns until she is much older. She would have to avoid undue emotional stress, and she would have to watch her weight and fitness closely. Unfortunately, the other possibility is bleak. Either way, we will have a better idea tomorrow. If she survives the first twenty-four hours, her chances are significantly better. I’m sorry.”

As the doctor pushed past the heavy doors marked “Room 129” the young parents, seven long hours since they had been so elated, held each other and cried.


I watched as the cedar-haired girl closed her locker – 2C. The one five lockers and a left turn down from mine. But she wouldn’t know how far away her locker was from mine, because she doesn’t have any idea who I am. If she knew I existed, she would know I play tennis, and like pizza. She would know that I secretly enjoy chick flicks, and that I think reddish eye make-up is creepy, even if girls insist rust-colored shadow makes their new auburn highlights pop. She would know that when girls say things like that to me, I think about what sounds good for lunch. She might even know that I fell head-over-heels for her in the seventh grade, and despite trying for over a year, have been utterly unsuccessful in getting up and moving on with my life. She would know all these things, if she knew I existed. Unfortunately, she doesn’t.


I felt eyes on my back, and the skin on my cheeks prickled, reddening. He was staring at me again. I wonder what he thinks about. Does he notice I straitened my hair today, rather than leaving it in my routine ponytail, so it would look pretty for him? Does he consider talking to me, just once instead of staring anonymously, brown eyes longing and dark hair so perfectly messy? Or is he staring at someone else? His girlfriend maybe? The thought makes my heart want to break apart inside my Aeropostale-clothed chest. I turn, unable to “search for books” any longer without the risk of him noticing I’m stalling.


She turned around, finally having found whatever school supply was eluding her today. I started to turn back to my locker, but I was too late. For a moment we were connected by an invisible string, staring. Her eyes were laughing like she knew something special I didn’t. I smiled shyly, and she began to walk toward me, pressing through the warm wall of students. My heart jumped within my chest, begging to be freed from the cage of my ribs.


He had been staring at me! His shaky smile confirmed it. I walked over to him, oblivious to the pressing throb of human bodies, feeling like I wasn’t touching the ground. Almost literally walking on air. I leaned on the dirty blue locker next to his and smiled.


“You stare at me. Why?” My blood froze in my veins, and my heart pumped like mad trying to get it to move. My face was fire hydrant red. She had noticed me staring at her! Did she think I was a stalker? Is she mad? Does she hate me now? My tongue felt swollen and useless in my mouth. I started to long for a few minutes earlier, when I had thought she didn’t know I existed. I was caught between a rock and a hard place, and the girl I loved was staring me, green eyes expectant. I decided honesty was the best policy. After all, I couldn’t lose what I never had.

“Because I think I love you.” I held my breath, bracing myself. Why did I say that?

“You know, you could have just come and talked to me. I’ve loved you a long time.” Warmth spread over me. I had never been so happy. We leaned in, slowly, and I wrapped my arms around her. My lips parted, brushing hers. The word’s most perfect kiss was imminent. My heart swelled and I moved the final inch.

A small gasp escaped her and she went limp in my arms. Passed out cold.


Someday, when our daughter asks how I knew you were the one, I can tell her I knew because the first time we kissed, my heart literally skipped a beat. 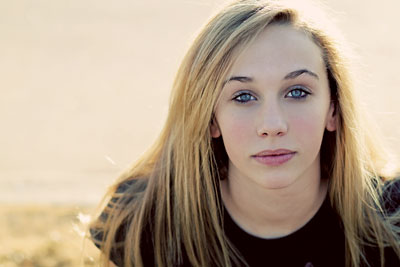 The author's comments:
I think it's fun to create totally cliché situations, and turn them in an unexpected direction. :) Enjoy!
Post a comment
Submit your own

View profile
This is my favorite piece of yours so far :)  I don't generally like romance, but I could almost relate to this.  I think about what other people are thinking a lot, so I enjoyed the characters doing the same thing :)  And of course, the ending was just perfect.
AsIAm PLATINUM said...
on Nov. 12 2010 at 10:38 pm
AsIAm PLATINUM, Somewhere, North Carolina
48 articles 3 photos 606 comments

View profile
The first part is in a doctor's office, with no narrator.  Then it swaps around between the teenaged version of the baby and a guy in her school. :) I know it needs a lot of clarification...
Healing_Angel SILVER said...
on Nov. 10 2010 at 5:27 pm
Healing_Angel SILVER, Sydney, Other
8 articles 2 photos 509 comments

Favorite Quote:
"DON'T PANIC." ~from The Hitchhiker's Guide to the Galaxy by Douglas Adams

View profile
Awwwwww :) I liked how you started in the future and then built their story backwards. Two things---I don't know who the narrator is in the beginning; is it a nurse watching everything unfold? 2---If this woman has just given birth, she's going to be lying on her hospital bed totally wiped out and exhausted, not standing next to her husband so she can cry on his shoulder. He'd probably be sitting next to her holding her hand or something. One more thing---the present section seems rather, I don't know, neglected compared to the past section---more grammar errors, not as carefully done. Again, I loved this. I would be curious to see you write a story about an older daughter....Would you mind reading some of my work? Thank you!
starxoxo23 PLATINUM said...
on Oct. 2 2010 at 3:39 pm
starxoxo23 PLATINUM, New Hampshire, New Hampshire
21 articles 0 photos 97 comments

Favorite Quote:
Man iz not born to understand life .. but to live it..~!!

Favorite Quote:
'If there is a book you really want to read that hasn't been written, then you must write it' ~ Toni Morrison
' Stupid is as stupid does' ~ Forrest Gump