“That, young Maya, is a higgenbottom camp.”

The very core of my body stopped beating as his description of these creatures replayed in my head: “A higgenbottom is a type of insect that sucks your blood for its nutrients…The size of a…oh, what are they called in your world…? A car.” I started to realize just how much danger we were in while we were here, in this forest.

Jiggleweed got my attention by “psst!”ing me, and he motioned for me to move around the tree and try to get a better look. Maneuvering myself in an uncomfortable way, I peaked around the other side of the tree and squinted my eyes so I would able to see into the yellow light.

There were 2 of them; they were huge, brown, and had eyes like a fly’s. Their noses were very long and pointed at the end so that they could suck the blood of one of their unsuspecting victims. They looked exactly like a mosquito, but they were the size of an SUV or an Escalade. Right now, they were huddled around what looked like a cat with the head of a dog. I was so frightened beyond words that I immediately drew back to the darkness of the tree. Jiggleweed just shook his head at me in disappointment. I shook my head back, meaning I couldn’t do it. He nodded yes, that I had to do it, and I thought “This thing is trying to get me killed.” 2 quarts of blood lost all at one time would definitely hurt me.

Jiggleweed decided to be the hero of the hour then, moving over to my tree with stealth and precision. He was very cautious and, unlike myself, he wasn’t scared out of his wits right now. When he got over, he told me to run away and not look back. I hadn’t known him for very long, but I suspected that he would be brave and fast enough to get away on his way. I nodded my head once and ran off quietly into the distance. I had no idea where I was going and it was getting considerably darker by the minute. I decided to stop under the cover of what looked like a blue weeping willow tree and wait for Jiggleweed. After a couple minutes I was starting to get worried; what if the higgenbottoms had each taken a turn sucking a quart from his body? I wouldn’t be able to live with myself if someone else had died trying to protect me.

And that was another thing; why did Jiggleweed care so much about me? What was I to him? I mean, I didn’t even know him! Questions buzzed around in my head, puzzling me, as Jiggleweed found me under the tree. He was out of breath and he looked like he’d just seen a ghost.

“What happened?” I asked him.

“They chased me,” he replied. “It’s a wonder something that big can be that fast.”

“Of course. I lost them a while back. It’s a good thing you hid so far away, otherwise I would have led them right to you.” I sighed, relieved. “Well, now we have other matters to attend to; we need to get you to the Queen.” 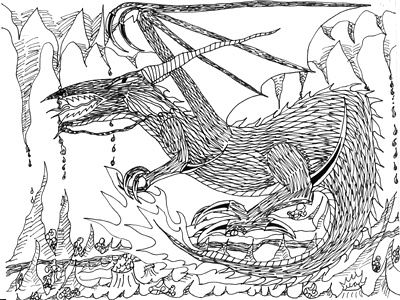