I spit out what little I hadn’t swallowed and asked Jiggleweed a deadly question: “Can they kill?”

He looked down at the ground, silent. No, I thought, this can’t be the end of my journey here. I’ve only just begun! What about the Queen? I’m supposed to go see her, and according to Jiggleweed I’m late even. What am I going to do now?

“Don’t worry young Maya, there is a remedy,” Jiggleweed told me, his face lighting up.

“What?” I asked him, almost hopefully.

“As long as you can make it the next couple days-” I went into a fit of coughing that cut him off. He cringed and shook his head. “I doubt you’ll be able to. We have something of a sort of witch here in Henningtom. We only have one and she works wonders. Her name is Yoka, and in this world she would be called a ‘pollywig‘.”

“I can make it,” I said, then burst into a torrent of coughing and gagging. I felt nauseous and I scolded myself for thinking that the berry was just a blackberry when I knew that so many things were different in this world.

“You won’t be able to, young Maya. It would take a whole day, maybe a day and a half at the most, to get to the east side of Henningtom, where Yoka is. And it would make us even later to see the Queen.” He looked down at the ground, contemplating. My forehead was sweating badly, and as I wiped at it I felt my hand get drenched in the smelly stuff. I wiped it off on my pants and looked over at Jiggleweed. He was drawing something that looked like a map in the dirt with his hoof.

“Jiggleweed, hurry, please,” I implored of him. He looked up at me and smiled, something that looked a little strange on the face of a deer.

“I’ve come to a conclusion,” he said.

“We will follow the river to the east side of the forest and see the pollywig. Then we can catch a boat to the north side and travel the rest of the way to the Queen’s castle, seeing as you’ll be better by then, or you should be.” He smiled in triumph and I coughed again.

“Oh, right. Yes, of course.” He picked a few leaves off a nearby tree and chew them, making a quick meal. Then he got behind me and said, “Come on then, on you go.” I looked at his back. It was small and looked very unstable for someone of my size. I told him I couldn’t get on and he tripped me backwards, so that I landed on it. To my surprise, it was a very sturdy and strong back.

“Right then,” he said. “Off to see Yoka.” I coughed once more as we headed off. 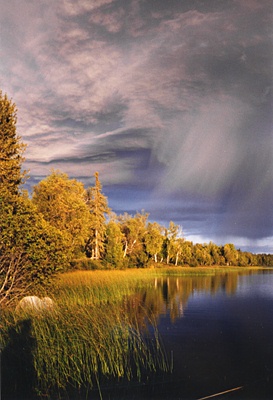