The Curse of the Frog | Teen Ink

The Curse of the Frog

Favorite Quote:
"Ability may get you to the top, but it takes character to keep you there." Anon

The Curse of The Frog

Because the sun was shining at the right angle. Because the dogs’ barks were so softly reaching her ears. Because all she knew was that this day was beautiful. It was. Leaves sifted through the air and a breeze picked up. A savory smell, like sizzling fat reached and tantalized her nose. That was it. She’d tried. She’d tried being romantic, but the gesture was foolish. No one was there to see it. To see her. The time was ripe to move ahead, to dig a hole in the fog around her life and step on through.

Right there. There. He sat on a bench; his hair rustling in the breeze like winter birds. So sweet. She had a sweet tooth.


Walking up to him, she put her hand on his shoulder and looked off to the water, where he was staring. It was quite the beauty.

“Wanna come to a barbeque?” Her voice sounded so much like she’d longed for this moment, to speak.

“Yes, sure.” He looked up and saw her. Now she was the far off water. He smiled.

“Why were you out there all alone?” She was interested in seeing someone else with a romantic vision so like her.

“I was waiting for the fog to lift to see the grandeur of the waves.”

“Interesting ambition. The world is full of fog, you know.” Looking at him, she saw his face ponder the truth in her philosophy. Finally, he looked resigned to it and nodded.

“So, what is there at this barbeque?” He asked nervously gazing at her and looking away.

“That’s nice,” he dreamed the full meaning lost on him.

“Do you dance?” She stared, patiently, at the side of his face.

He looked at her as though he were panicked and started looking around and fidgeting.

“What’s wrong?” She was confused. What happened? He started walking forward really quickly then nervously jumping and grabbing his head. His hand shrunk. She stopped, frightened. What’s going on? His other hand shrunk. She was frozen. Huh?

One by one, each of his appendages shrunk, and he took on the appearance of a frog. What was happening? She was so bemused that she didn’t notice the tiny scroll fall out of his former pants pocket until she bent down to look at him.

“Oh, my!” She couldn’t believe her eyes. He, now, in her mind, The Frog, was wearing a thimble for a crown with a tattered leaf as his royal robes. At least, she assumed he was royalty.

The Frog croaked then looked at her. “You never told me your name,” The Frog observed with a smile. Taken aback, she could not speak. He could talk!

“Well, neither did you.”

The Frog croaked again and replied, “My name’s Rupert Bleudarte. Your turn.” Patiently, he rose up in that curious way frogs do and stared.

“Me, my name’s Bernette Wolfgang.”

Rupert, The Frog, looked at her in what she assumed to be amazement. His huge frogeyes gaped, and his mouth hung open. It unnerved her.

“Is there something wrong?”

“No, I just recalled reading about a woman named Bernette Wolfgang in one of my father’s books. Do you happen to be related to her?”

“No, I have no idea. She may be a distant relative, but I am not into genealogy,” Bernette looked up and back at Rupert. “Would it be okay if I held you in my hands? My back is starting to hurt.” She held out her hand to him.

Rupert looked at her palm and replied, “Guess that I’m not much in the way of eye contact, am I?” With a small chuckle, he flapped his awkward forelegs onto Bernette’s fingertips and jumped. Bernette raised him to her eye level.

“There, that’s better. So, what do you think it is that caused you to shift like this?”

Rupert squinted and looked away for a while, “Do you remember the fairy tale ‘The Princess and the Frog’? I think that may be worth trying.” He looked at Bernette apologetically. She made a disgusted face and drew Rupert further from herself.

“Ewwww! I don’t think so! I will NOT kiss a … frog!” Bernette wrinkled her nose to emphasize her point.

“Of course not. Not a single girl I know will even attempt to kiss a frog prince, even with all of his gold and fancy clothes. Figures.” Rupert rolled his eyes and looked slowly back at Bernette to see how she reacted.

“You’re sure that you are a prince and not just some lame old fly eater covered in trash?” Bernette felt a little doubtful even though, it did sound reasonable to claim he was the frog prince, “Maybe we could test your theory. Whadya say? Deal?”

“It’s a start. How else are we going to make me human?” Bernette leaned in to kiss him with a look of inherent disgust on her face. Rupert just sat there horrified at how huge her mouth was. He just couldn’t do it.

“Stop!” Rupert croaked out. “I can’t do this. I am just way too nervous,” he paused, “Maybe later?” Bernette leaned over and set him on the ground again.

“What would you like me to do with your clothes, seeing as you no longer fit in them?” Bernette bunched up his clothes in her hands and waited for his reply. He didn’t answer. Instead, he was looking just ahead and walking slowly as if he saw something, but forgot where it was. Bernette looked with him. Just beyond the toe of her shoe was a small copper cylinder. She picked it up and looked at it for a little while. Rupert gazed on expectantly.

“A scroll!” Bernette gasped excitedly. Rupert looked up as much as he could to see the scroll.

“Could you bring it down a little? I’d like to check it out; it may hold the key to changing me back.” The scroll was written in old English calligraphy and said that unless Rupert cast away his fortune, he was doomed for all eternity. 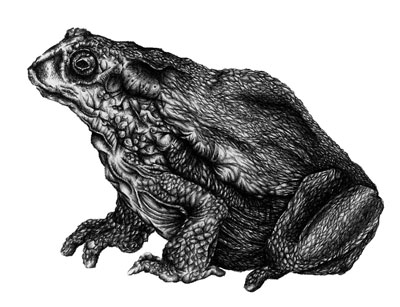 The author's comments:
This piece started off as a study of description, but then the characters developed and the plot is very nearly modeled after The Frog Prince.
Post a comment
Submit your own