He stood outside the barn door. Under the dark cloak of night, the silhouette of the barn stood as a dark, formidable figure against the night sky. No stars shone tonight. He was wearing the denim rugby jacket today, the one his father had bought him on his sixteenth birthday, right before he died. Right before his mother was diagnosed, right before she needed the kidney transplant, right before the bills started getting too high. He stuck his hand in his pocket, felt the gun, curled his fingers around the barrel into a fist. Slowly, tensely. The metal felt cool against his warm skin… too cool. He shivered, pulling his hand out.

Where were they? he wondered, getting impatient. His mother would be waiting at home. He’d have to do the Task, then add an extra half hour to wash up at one of the members’ apartments downtown. Then he’d arrive late, yet again, and she’d ask questions. He scowled when he thought of another confrontation.

His mother thought he was working, up at the burger place where they paid 4.25 dollars an hour. Yeah right. He had quit long ago. He soon discovered that he wasn’t one to work with food, to work with meat and grease and oil for long, toiling hours with no reward. His mother was right about one thing, the boy thought with a grimace. I have more potential than that.

Yes. I work with another type of meat now.

He suddenly laughed aloud in the cool night, disturbing the silence. Work at a place where they paid 4.25 dollars an hour for washing trays and making greasy food? When he did what he did, and got all this money?

He stopped laughing as something twinged inside him. He chose to ignore it, hunching his shoulders against the cold. No, his mother would not want to know the truth.

“What are you laughing at?” A cold voice spoke from behind him. Even though he knew the voice, he instinctively whirled in its direction, his eyes wide. When the one who had spoken saw this, he grinned…. A wide, blood chilling grin.

“Nothing… nothing, Master.” He tried to ignore the smile, that cold smile. The Master was flanked by men on either side of him…. Ten men, the boy quickly counted. This was more than Master ever risked bringing at one time. This must be a very important Task.

“Is the site covered?” Master asked.

“Yes, I pulled all the wires. The cops won’t sniff a thing.”

Master’s cold grin stretched further across his face. “Now… all we have to do, is wait for him.”

“Who’s bringing him?” someone to the left of the Master asked. The boy with the rugby jacket remembered this one… once he had been assigned a Task, and he had failed. He was weak. He was human. Master does not permit humans.

The left side of his face was covered in twisted, healing scars of wounds the Master had inflicted with The Knife. The boy with the rugby jacket did not remember his name… they did not address each other with names. There was Master, and there was the rest of them Boys. That was it.

“Three of our guys,” Master answered. “He should be here shortly.”

It was moments before a black sedan pulled up in front of the barn with a quiet, sort of muffled sound. Before the headlights were turned off, the boy caught a glimpse of two of their guys in the back, and a silhouette of another boy, his head covered in a paper bag.

They got out of the car quickly, efficiently, the way Master’s boys were trained to. The way he was trained to.

In merely a few seconds, the boy in the rugby jacket found himself in the barn, all of the forming a circle around the boy with the paper bag. The boy was held to the chest of one of their biggest boys, the barrel of a gun pressed against his neck through the paper bag. Even though he could not see his face, the boy in the rugby jacket could imagine the fearful expression he was sure to be there. He could see the tension in what showed if his neck, how the pale tendons stood out.

It was hard to see in the darkness, but the unmistakable figure of Master stepped forward. From his position in the circle, the boy in the rugby jacket could see the Master’s face, most of it lost in shadow. But even through the darkness, his eyes stood out clearly. His gray eyes sparkled with something almost like…. Mirth.

“Where is my money?” Master was not one to waste time. He got straight to the point.

“I… I’ll bring it. I will.” The poor boy’s voice was muffled, thanks to the bag, but the note of fear in it was undeniable.

“Where is my money?” Master asked again, a bit of frustration flickering in his eyes, though his voice stayed steady.

“You are out of time.” Master’s voice was tight with control. He took another step forward, leaning in towards the bound boy. “Now, I will ask you one more time…. Where is my money?”

It was a few moments before the boy answered. “I don’t have it.”

For a few minutes, Master stood still. Then, his fist snaking out like a whip, punched the boy’s face, the force sending the impact sending him and the man holding him staggering backwards. The paper bag darkened with blood.

A couple of guys stepped forward, cocking their guns. But master suddenly shook his head.

“No. Not you.” He whirled, his entire body shaking, and lifted a finger. “You. I want you to do it.”

The boy in the rugby jacket couldn’t move.

He didn’t know why he suddenly couldn’t move. Why he couldn’t reach into his pocket and pull out the gun, aim, and shoot. He always thought he could. He always swore he could.

So why couldn’t he?

The boy in the rugby jacket willed his hand to reach into his pocket. His fingertips grazed the cold metal. It was cooler now. His fist curled around it, slowly pulled it out. He lifted his arm. The gun was shaking.

“Shoot him right in the face! Shoot him!”

The boy swallowed. Right before he pulled the trigger, he met the eye of the boy with the scars. His eyes were sad… pitiful.

Then he pulled the trigger.

As he walked home, hours later, he remembered the name of that boy. His name was Ralph.


When he woke up the next day, he found the sun pouring in from his window. He judged it was after noon.

He pulled himself out of bed. He’d only have a few hours to spend with his little brother before he’d have to leave… before Master would want him again.

“Mother… Mother?!!” He ran over to her. He put his hands under her armpits, straightened her figure, then tried to pry her hands from her face. Her entire frame shook from the force of the sobs. “Mother, what happened?”

She removed her hands from her face, took a shaky breath. There were bags under her red eyes.

He couldn’t hear anything beyond the pounding in his ears. He was out the door before his mother finished her sentence.

He reached up and straightened his cap, and turned the skillet once more. There were two more orders he had to fill. He put in the burger in the bag, the slammed it onto the counter. 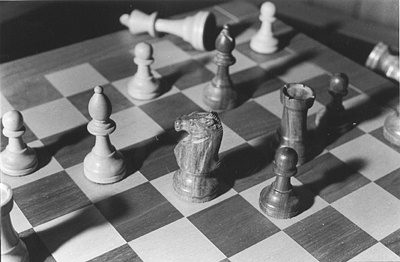 This article has 81 comments.

View profile
My anwser to that question would be William Golding's anwser: Every person is born with innate evil that is supressed by civilization. But not everyone can escape the evil.... certain events can trigger that evil to come out and shatter the facade of morality.
MissFaber SILVER said...
on Feb. 5 2010 at 4:02 pm
MissFaber SILVER, Wayne, New Jersey
5 articles 0 photos 156 comments

View profile
thank you! im glad to see that my writing had that kind of effect on someone.... and don't worry. I will NEVER stop writing, and niether should you. thanks :)
unwrittenlove DIAMOND said...
on Feb. 4 2010 at 7:07 pm
unwrittenlove DIAMOND, Mount Berry, Georgia
61 articles 11 photos 153 comments

View profile
Oh. Wow. Amazing. I loved this piece so much. I started to cry, seriously. I can see how your writing is similar to mine. I can feel the character's emotions. I can see the movie in my mind. I can picture the expressions on the faces of the characters. This was a great short story. No matter what anyone tells you, never stop writing. Never stop writing. You can be the next J.K. Rowling, with the way you write. Fantastic job.
HaniE said...
on Feb. 4 2010 at 1:05 pm
It’s amazing how one wrong doing typically lead to another, I love how you painted the picture when the boy shot his brother not knowing who he is..but the question is—can someone really do such a thing under pressure, or it was his evil nature that led him to do so???
mimi said...
on Jan. 29 2010 at 3:23 pm
you made a good work

i am so proud of u

View profile
thanks :) im glad you liked it