That day proved to be most unusual. When I got the phone call, my boyfriend, Josh, and I had been making out. I picked the phone up, looked at the caller ID, and saw that it was my friend Lacy.

Lacy hadn’t talked to me for two months. Slightly annoyed that she should call me at this time, of all times, I picked up the phone. “How’s it going?”

“Are you ready to hear my story?”

I did want to hear Lacy’s story. The story of why she had practically broken down when we were having a regular conversation, why she had told me that I was her best friend one week, and then the next week refused to talk to me. Lacy had stopped answering my phone calls, as well as the calls of my roommate, Lynne. I just didn’t want to hear the story right now. I motioned to Josh to leave and as he laced up his sneakers, Lacy said into the receiver:

“ I was in the mental ward for a week. They think I have psychosis.” I didn’t expect this coming from my friend. I mean, you always hear stories about people in mental hospitals, but you never expect it to happen to someone you know.

“It means I hallucinate. I can’t tell the conscious apart from the unconscious. Oh, God!” she added. “I don’t want to go back to the mental ward again, but at least the experience taught me to appreciate being conscious. And I met some nice people there.”

When Lacy imitated the guy, I was glad to see that at least a small part of Lacy was still Lacy. However, in our phone conversations Lacy rarely sounded like herself. Lacy told me she no longer enjoyed the activities she used to enjoy, such as reading and horseback riding, and that at nineteen, she felt that her life was over. Lacy told me that the doctors said trying marijuana had brought on her depressive state of mind.

“ I think it’s something that’s been inside of me for a while. It’s been asleep for a while, but the marijuana caused it to come out.” Lacy said of her depression.

I had never heard of anyone having this sort of extreme reaction to smoking pot. Sure, I knew that weed could make it hard to focus, and that if you smoked it often enough, it could alter your thinking. People said that smoking pot opened up your mind. Well, it sure hadn’t opened up my friend’s mind in a positive way, as she told me of experiencing feelings of anxiety, sadness, and fear of death.

Around this time, I started to feel guilty. I thought of how Lacy and I had discussed smoking pot before, in a joking way. We thought it was funny. We wanted to be like the people on “American Pie” because they were always partying and those were some of our favorite movies. Even though I knew that it wasn’t my fault because I hadn’t been the one to give marijuana to Lacy, I still felt that I had encouraged her to smoke. I also knew that the person who gave Lacy the marijuana hadn’t expected her to have the reaction that she did. Everyone we knew who smoked weed just laughed a lot.

But marijuana isn’t all fun and games. It is the most widely used, and, I believe, abused illegal drug in the United States. Students in high schools all across the nation are smoking pot, and it seems a harmless way to spend some time. However (and I repeat this): weed IS a drug and it IS illegal. As a drug, the consequences are unpredictable. People who benefit from weed claim that it opens up their minds and aren’t afraid to express that, but the people who suffer the negative consequences aren’t speaking up. Some students may have trouble focusing, and their grades may suffer. Furthermore, Lacy’s reaction wasn’t one- of-a- kind. According to abovetheinfluence.com, smoking marijuana can lead to anxiety and depression, as well as schizophrenia! If that doesn’t convince you, then how about this statistic: Marijuana smoke has twice as many carcinogens as tobacco smoke (Abovetheinfluence.com)?

I don’t understand how something so “harmless” could alter our friendship so much. Lacy and I hardly hang out anymore, and every time I talk to her on the phone she tells me she doesn’t see the point in living. Some days Lacy sounds like she is doing okay, but then there are the days when she talks the way I mentioned. “ I’m afraid.” she told me the other day. “I’m afraid of nothing in particular. This isn’t a fear of spiders. At least with a fear of spiders, someone kills the spider and you don’t feel afraid anymore. But the way I’ve been feeling, it doesn’t leave, except for when I’m asleep.” I wondered how it must feel to be so depressed that nothing could take your mind off the fear of living, but then I decided that I was better off not knowing. 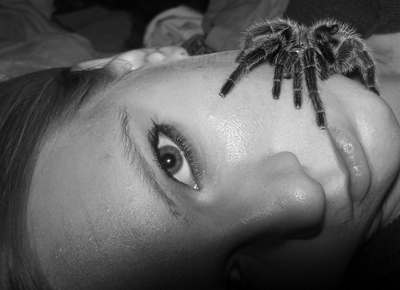